City University of Hong Kong (CityU) has launched a Putonghua Salon to provide a relaxing environment where students can learn and practise Putonghua.

The University is devoted to nurturing language ability and a global mindset to prepare graduates for tomorrow’s challenges. The salon reflects CityU’s commitment to develop ideal graduates. 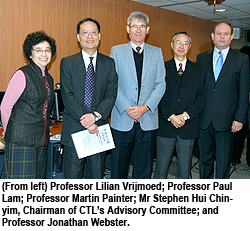 “This is a very important development for the University,” said Professor Paul Lam Kwan-sing, Acting Vice-President for Undergraduate Education, at the launching ceremony on 18 February.

“Besides applied research, quality education is another core business that we have to engage ourselves in,” Professor Lam said. “In doing that, we need a formal curriculum, but co-curricular activities are equally important. The Putonghua Salon is a prime example.”

Other officiating guests at the ceremony were: Professor Lilian Vrijmoed Kwan Lee-ping, Dean of Student Learning; Professor Martin Painter, Acting Dean of the Faculty of Humanities and Social Sciences; and Professor Jonathan Webster, Head of the Department of Chinese, Translation and Linguistics (CTL).

Organised by CTL, the salon will be held every Monday and Tuesday from now on till 22 April, from 1:30-3:30pm. All students are welcome, including local and non-local students. A Putonghua teacher will act as a facilitator and four or five students from the English-Putonghua and English-Cantonese interpretation courses will act as helpers to encourage participants to practise Putonghua. 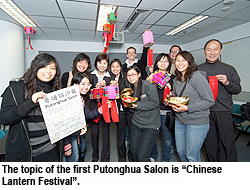 Each salon will have a topic for discussion. To create a lively learning atmosphere, the topics will cover coming festivals and other hot issues. At the first salon, on the Chinese Lantern Festival, students tried to use Putonghua to solve riddles.

Olivia Fong Sin-wut, a Year 2 student majoring in Translation and Interpretation and one of the student helpers, said she had a keen interest in Putonghua. She hoped to further enhance her Putonghua by helping others at the Putonghua Salon.

Robert Hooper, an exchange student from Canada who has studied Putonghua, would like to practise at the salon. He thinks the salon can also help non-Chinese speakers who can speak only a little.

Please visit http://ctl.cityu.edu.hk/PTHSalon for more details of the Putonghua Salon.