The creative ideas proposed by a group of four CityU students and graduates for revitalising a Grade 1 historic building have gained recognition in a recent competition. Their design was selected as one of the three winning entries in the Open Group of “An Infinity Journey - Ideas Competition for Mei Ho House of Shek Kip Mei Estate”.

The competition was divided into professional and open groups, with the latter open to the general public. The CityU team formed by Alex Ng Wui-chun and Leung Hong-kei, both final-year students in the Department of Building and Construction, and Ivan Liu Man-ho and Maxx Leung Kei-hang, graduates in the same department and the Division of Building Science and Technology respectively, was selected as one of the three winners among the 33 teams in the Open Group.

Under the theme of “Breaking the Wall”, their winning design maintains the residential function of Mei Ho House by converting the oldest local public estate into a youth hostel. Partitions are punched with glass panels in different sizes with the aim of breaking the barrier between residents.

“Intimate neighbourhood relationships could be found among early public housing residents. They usually opened their doors and prepared meals in the corridor. Our idea is to recreate such relationships,” said Alex. Their design has a spacious common area with kitchen, laundry room and entertainment room that aims to enhance interaction among travellers. 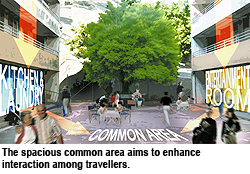 According to Leung Hong-kei, they learnt from the University the importance of striking a balance between conservation and development. “Conservation of old buildings is undoubtedly important, but it will be meaningless to preserve only their forms. What we tried to do is not only conserving the hardware but also the significance and sustainability of the building,” he said.

The judging criteria were creativity, conservation of heritage characteristics and harmonisation with the neighbourhood. The jury commented that the ideas of “Breaking the Wall” were innovative; the design had accounted for treatment of the interior of Mei Ho House and would have minimal impact on the original structure.

The award ceremony officiated by the Hon Professor Patrick Lau Sau-shing was held on 17 December 2007. Winning entries will be exhibited at the Hong Kong Cultural Centre in Tsim Sha Tsui from 8-13 January and at Shek Kip Mei Estate Exhibition Hall from 15-31 January.