The Fourth Pacific Rim Conference on Mathematics opened at City University of Hong Kong (CityU) on 7 December, bringing together an esteemed collection of mathematicians from around the region.

Continuing the tradition set forth by the previous Pacific Rim Conferences, this conference is a high-profile mathematical event lasting five days. 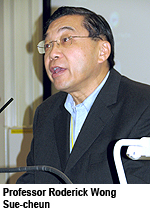 The objectives of the conference are to present the latest trends in mathematical research to a wide audience and to develop stronger ties between mathematicians in the Pacific Rim region.

There are a total of 15 plenary talks, eight for the focus sessions of the Fourth Pacific Rim Conference, and seven talks specifically celebrating the tenth anniversary of CityU’s Liu Bie Ju Centre for Mathematical Sciences.

During his opening remarks, Professor (Chair) Roderick Wong Sue-cheun, Vice-President (Research) and Director of the Centre, highlighted the growth of the conference and the number of organising institutions, which now totals eight universities or mathematical institutions from Australia, New Zealand, Chile, South Korea, Hong Kong, mainland China and Taiwan. 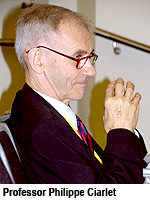 Professor Wong, who is co-chair of the conference organising committee with Professor (Chair) Philippe G Ciarlet of the Department of Mathematics, also reserved special praise for the role the Liu Bie Ju Centre for Mathematical Sciences has played in bolstering CityU’s standing in the international mathematics community.

“The Liu Bie Ju Centre has been running many conferences, workshops and distinguished lecture series, and hosting many very eminent visitors, all of which add greatly to CityU’s own respected position in the international academic and mathematics community,” Professor Wong said.

Professor Wong said the aim of the Centre was to have joint activities with the top institutions in the world.

“The Centre is becoming very well known in the mathematical community. The sheer volume of famous mathematicians to visit, including three Fields medallists, is a strong indicator of its international standing and the University’s growing reputation in applied computational mathematics,” he said. The Fields Medal is presented every four years and is widely viewed as the top honour a mathematician can receive.

Professor Tai-Ping Liu of Stanford University, US, and the Academia Sinica, Taipei, Taiwan, was the opening plenary speaker with a presentation on Shock Wave Theory.

The conference ends on December 11.