Professor (Chair) Paul Chu Kim-ho of the Department of Physics and Materials Science has been rewarded for his outstanding technical contributions to the field of plasma science. 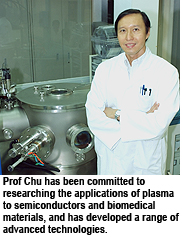 Researchers around the world making major contributions to nuclear and plasma sciences are eligible for the award, which is the Society's most prestigious honour. It is given out to just one person each year. In fact, Professor Chu is the first Hong Kong academic, and the only one from an Asian institute, to ever receive this honour, ever since the award was established in 1972, which is another proof that CityU has world-class scholars and researchers.

Since joining CityU in 1996, Professor Chu has been committed to researching the basic theories of plasma and plasma implantation and the applications to semiconductors and biomedical materials. He has developed a range of advanced technologies, including plasma-based orthopedic NiTi shape memory alloys for correcting spinal deformities. The application is currently undergoing clinical trials in the Faculty of Medicine at the University of Hong Kong.

In addition, he collaborates closely with the Shanghai Institute of Ceramics of the Chinese Academy of Sciences on projects using plasma technology to encourage cells to grow on ceramic, a material used for producing artificial hip joints. 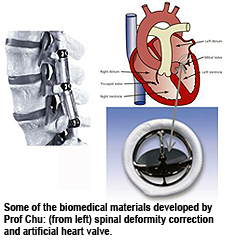 Under Professor Chu’s leadership, the CityU Plasma Laboratory has published more than 500 international papers and holds 11 patents in the mainland and the US. Plasma technology is used to improve the durability of satellite parts, reducing wear and tear, and produce the first silicon-on-insulator (SOI) wafers by plasma implantation. SOI increases the operational speed of computer notebooks and mobile telephones by up to 30%.

As a mark of his influence, Professor Chu is credited by ISI Thomson Scientific as one of the 0.1% leading scientists in materials science in the world. He is a Fellow to many international professional organizations, including the American Vacuum Society, IEEE and the Hong Kong Institution of Engineers. He edits many international academic journals.

Receiving the award was both a surprise and an honour, Professor Chu said. “CityU encourages academics to conduct applied research and transfer the outcomes to society. This makes our work more meaningful and motivates us to make further progress,” he said.