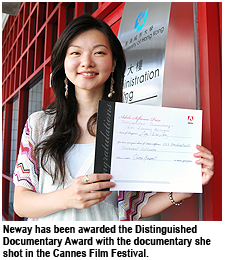 A Creative Media student at City University of Hong Kong (CityU) took part in Cannes Film Festival 2007 and won an award from Reel Ideas Studio for a documentary that she and her teammates shot as part of a project at the Festival.

Among 40 candidates selected by the Studio, Neway Liu Wai-lan, a Year 2 student in the School of Creative Media, was the only student from an Asian institute.

The Studio is jointly sponsored by Adobe, Intel and Vancouver Film School. They send students to Cannes Film Festival every year starting from 2006 to learn and gain experiences in this international event. Neway was selected as one of the candidates under the recommendation of Mr Patrick Tam Ka-ming, Associate Professor in the School of Creative Media.

The film Moths to the Fame won the Distinguished Documentary Award and was selected by the Studio as one of the three most outstanding works among the ten documentaries produced as part of the programme.

It tells the story of a lighting control supervisor in Cannes whom Neway and her group met on a set. He is a hard-working man and has been promoted to his current position after 25 years at Cannes.

In addition to the documentary project, Neway and the other participants had the opportunity to attend movie premieres and press conferences at the festival, mingling with famous film directors such as Mr Wong Kar-wai, Mr Michael Moore and many other movie makers from around the world. This was an excellent way to learn about the movie industry. 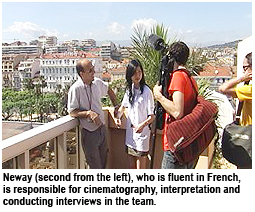 Prior to studying at CityU, Neway studied French and fashion design in France for a year. Her language skill and her understanding of the local culture were a great help in the production of the award-winning documentary: she took up the role of cinematographer, interpreter and interviewer.

This was Neway’s first documentary and she said she was delighted with the positive feedback, adding that she was very grateful for all the support from the School of Creative Media. Neway’s trip to France was also supported by a Spring-Time Outreach Scholarship, which is awarded to full-time students in the School of Creative Media in support of their participation in significant outreach programmes.

“I would not have been able to join the festival without this level of support,” she said. “It has been a valuable opportunity for me to attend this international event as a student. To go to the Cannes Film Festival is the dream of all filmmakers and I feel honoured to have this opportunity.”

Neway has been studying editing and script writing with Mr Tam since Year 2. “Neway is a multi-talented, studious and highly-competent student,” Mr Tam said. “She will be able to learn more about the operation of the film industry through such overseas film festivals and interact with film makers around the world. This has been an eye-opener for her.”

Neway said studying at the School of Creative Media had broadened her vision. “Before I got into CityU, I majored in arts and drawing,” Neway said. “The diverse curriculum at the School of Creative Media has shown me a completely different world of media creation. I knew nothing about film shooting or editing when I first entered CityU. After two years of study and training, I have mastered the basic skills of visual production.”