CityU recruits the top 0.7% students from 24 mainland provinces and cities 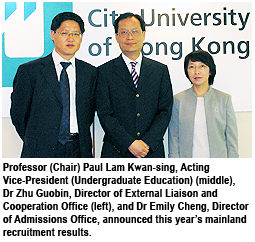 Around 200 high-quality students from 25 provinces and cities on the mainland will begin their studies at City University of Hong Kong (CityU) after the successful completion of this year's admission exercises through the National Joint College Entrance Examination Scheme (NJCEES).

The results, which are even better than last year's, demonstrate that CityU's emphasis on internationalized programmes and professional teaching is continuing to attract the cream of mainland students.

CityU emphasizes quality when identifying students, and this year the University has admitted top performers in academia, English language ability as well as in terms of their personal qualities. 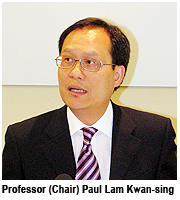 "I hope the new students will enjoy the whole-person training at CityU, and ascend another storey in the area of academic, sports and arts, and personal quality," he added.

Candidates admitted from 24 out of the 25 provinces and cities through the NJCEES are the top 0.7% performers. Seventy-four percent of the candidates in arts rank within the top 200, which includes a student from Yunnan who ranks second. Candidates in science are also outstanding. They include, for instance, a single-subject champion from Guangdong and a first-class awardee in the 10th Chinese National Olympiad in Informatics.

All newly-admitted candidates have scored an average of 131 in English, higher than last year's average of 129. The better English standard will equip students in adapting to university life in Hong Kong.

Forty-two percent have been awarded "good student ambassadors", i.e. recognition of their balanced spiritual, intellectual and physical development. Twelve are winners in sports and art competitions.

All newly-admitted candidates are well above the Band One baseline for admission to top ranking universities, including Tsinghua University, Peking University, Zhejiang University, Fudan University and Shanghai Jiaotong University. In fact, the average admitted scores this year all increased compared to last year's.

In addition, CityU participated in the recruitment campaign for the first time in Anhui, Hebei, Heilongjiang, Jilin and Shanxi and achieved excellent results by recruiting the most outstanding students. The scores of students admitted by CityU are similar to those students admitted to the nation's top universities.

As a side story, five arts students who rank within the top 40 in Henan, Anhui, Guizhou, Yunnan and Shaanxi hesitated to take CityU's offer due to financial considerations. But the University and the Faculty of Business have decided to put together special scholarships to allow these five students to fulfill their dream to study at CityU.

The mainland students admitted by CityU over the past few years have achieved excellence upon their graduation. Most have pursued further studies at prominent overseas universities or are working at international enterprises in Hong Kong.