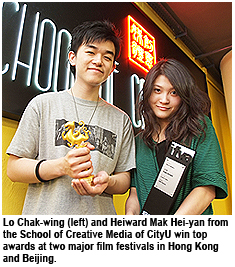 Two students from the School of Creative Media at City University of Hong Kong (CityU) have won top awards at two major film festivals in Hong Kong and Beijing. The achievements are the industry’s recognition of the two students’ creativity and talent.

Lo Chak-wing, studying on the Master of Fine Arts in Media Design and Technology programme, won the Grand Adjudicator Award at the 14th Beijing Student Film Festival for his documentary Me, mother, grandmother, father, DV; and Ms Heiward Mak Hei-yan, a graduate of the Bachelor of Arts in Creative Media, received the Gold Award in the Open Category of the 12th Hong Kong Independent Short Film & Video Awards (IFVA) for Lovers’ Lover.

Both film-makers are delighted with their awards. Lo Chak-wing said the award was recognition for his creativity and had helped boost his confidence, while Heiward said she was surprised by the result and the opportunities it had brought. She said shooting her film was an invaluable experience and winning the competition was a bonus.

Lo Chak-wing’s documentary shows how he used a simple hand-held digital video (DV) camera to reconcile a complicated family dispute. Although his award-winning documentary is in Cantonese with Chinese and English subtitles, the touching story won acclaim from all the judges at the Beijing Student Film Festival and beat 197 finalists from across the country to win the award. 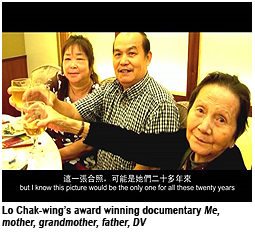 Me, mother, grandmother, father, DV is Lo Chak-wing’s first documentary. He said people were the most important element and should be depicted with sensitivity. The judges said Lo Chak-wing’s work was a touching story that reflected upon the beautiful side of human life and could help to resolve grief. Such comments rightly denote the creativity behind Lo Chak-wing’s work.

“He is very good at observation and organization,” Dr Wei said. “He has good control over narrative development and captures genuine reactions from the ‘actors’ to create a touching story.”

Inspired by stories from her friends, Heiward depicts a contemporary love story in Lovers’ Lover. Her work was described as “the liveliest story of the younger generation”, according to Ms Ellen Pau, one of the IFVA judges and a renowned film and video artist. Heiward said her aim was to build a real life story in her work to inspire the audience. 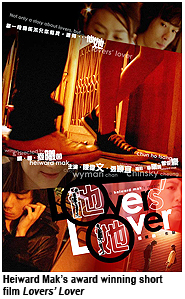 Her supervisors were Mr Patrick Tam Ka-ming and Mr David Yip Kei-man, Associate Professor and Assistant Professor in the School of Creative Media, respectively. “Lovers’ Lover has a very interesting story,” Mr Yip said. “Heiward acutely depicts the mentality of today’s young people with a good integration of script, image and actors. Having a very good sense of film production, she is adept at telling stories through images.”

Both Lo Chak-wing and Heiward enjoyed a productive time at the School of Creative Media. “The curriculum is broad, diverse and inspiring, and teachers give students a high degree of creative freedom,” Lo Chak-wing said. “I have acquired a lot of knowledge and different techniques in media creativity. The curriculum has broadened my vision.”

Heiward is grateful for the guidance and encouragement that her teachers have given her while studying at CityU. “Although I have graduated, I still keep in contact with my teachers. I ask them for their advice when I encounter difficulties at work. They are like my mentors and give me useful suggestions,” Heiward said.

After their initial success, both Lo Chak-wing and Heiward would like to pursue careers in creative media. Lo Chak-wing said he would concentrate on his studies and complete his master’s degree before going overseas for more exposure and inspiration.

In fact, Heiward was selected by Mr Eric Tsang Chi-wai to be one of the script writers on Men Suddenly in Black 2 last year. In addition to writing scripts, she is involved in film editing and she has produced “The making of” specials after graduation. She wishes to pursue further studies in the future.

The Beijing Student Film Festival is an annual competition for all university students in China. It is co-organized by Beijing Normal University and the Beijing Municipal Bureau of Radio and Television. The competition this year was divided into three categories, including short films, animated short films and mobile short films. The panel members included renowned movie makers such as Mr Feng Siaogang.

In addition to Heiward, four other students from the School of Creative Media achieved outstanding results in this competition.