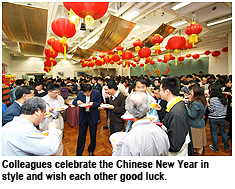 More than 1,000 CityU members of staff celebrated the Year of the Pig in style with food, music, dancing and the mammoth lucky draw.

The annual New Year Staff Party kicked off the Year of the Pig with an enticing lion dance at the U Circle followed by powerful displays of wushu that left the audience breathless. Added to this were Chinese arts and crafts stalls lining the U Circle, exhibiting clay figurines, grasshopper weaving, portrait shadow cutting, portrait sketching, fortune-telling, a lantern quiz and lots more. 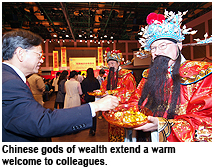 In addition, a sumptuous lunch buffet was laid on in the Multi-purpose Rooms, a great opportunity for colleagues to mingle and wish each other good luck at the beginning of the year.

A variety of celebratory programmes at the Chan Tai Ho Multi-purpose Hall brought the party to a satisfying climax. Professor H K Chang, University President, wished CityU colleagues good health, good fortune and a prosperous year, adding that he appreciated the fellowship he had enjoyed with CityU people over the past 11 years. During this period, he said, they had experienced and overcame difficulties together, but had also shared many wonderful moments. 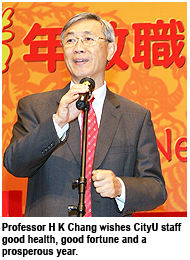 Professor Chang thanked all staff for their hard work and unity over the years, and then announced that the proposal for a salary increase had been submitted to University Council, giving a tremendous boost to morale.

Professor Chang has worked at CityU for 12 Chinese animal zodiacs. He joked that he could only address colleagues in Putonghua during his first years at CityU while he could now deliver Chinese blessings in Cantonese. The Cantonese saying "城市大學頂呱呱" which means CityU is number one, impressed him the most, he said.

This was Professor Chang's last Chinese New Year with colleagues at CityU in his capacity as President, and a Q&A session entitled An Interview with the President was conducted to test how well Professor Chang understood CityU. Hosted by Dr Ma Ka-fai, Assistant Director of the Chinese Civilisation Centre, this lively session went down really well with colleagues. 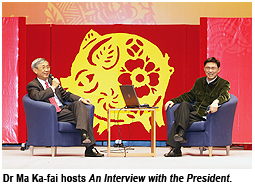 Professor Chang concluded his feeling with a Chinese poem "A moment that ought to have lasted forever has come and gone before I knew" (此情可待成追憶，只是當時已惘然) and recited together with Mrs Chang Xu Zhimo's poem "I leave quietly as I came quietly. I am leaving without taking so much as a piece of cloud. But with a quick jerk of my sleeve, I wave goodbye." (悄悄的我走了，正如我悄悄的來，我揮一揮衣袖，不帶走一片雲彩。)

The programmes that followed included a beer drinking competition and the grand prize lucky draw.

The Staff Party was organized by the Human Resources Office.