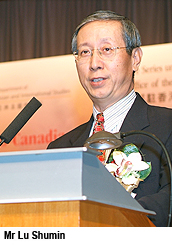 China's ambassador to Canada gave a thought-provoking lecture on 2 February at City University of Hong Kong (CityU) on the role Hong Kong plays in China’s diplomacy.

Mr Lu Shumin, Ambassador of the People’s Republic of China to Canada, delivered a lecture entitled “Hong Kong’s role in Sino-Canadian relations” at CityU, which was part of a series under the Forum on China’s Diplomacy launched by the Office of the Commissioner of the Foreign Ministry in Hong Kong. Hosted by the Department of Asian and International Studies of CityU and held at the Wei Hing Theatre, the lecture was well attended by University staff, students, alumni, and leading figures from the education, business and professional communities.

Dr Graeme Lang, Associate Professor and Head of the Department of Asian and International Studies, kicked off the lecture with a thoughtful and inspiring opening speech. Reminding the audience that education should be about leadership and about the ways in which leaders could make a difference, he shared with them the life and work of Canada’s great leader and one of its most long-serving Prime Ministers of the 20th century, Pierre Elliott Trudeau. 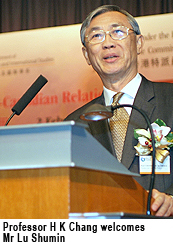 Professor H K Chang, University President, then gave a welcoming remark. He said: “All the students and alumni joining us today share a desire to acquire a global perspective about tomorrow’s world. The presence of Mr Lu not only fulfills the wish of these knowledge-hungry youths but also signifies our foremost efforts to groom a new breed of well rounded, culturally literate professionals.”

At the lecture, Mr Lu presented a brief review of China-Canada relations before looking into the role Hong Kong plays. He told the audience that his 5-day visit had enhanced his understanding of Hong Kong’s full-fledged legal framework, its world-class communications network and its economy, regarded as the world’s freest for its level playing field for all businesses and low taxation. “Hong Kong’s most valuable asset lies with its people—an abundant pool of well-educated professionals,” he added.

He said Hong Kong, with all these advantages and strengths, could play an important role in facilitating stronger economic ties between China and Canada and developing a deeper understanding between the two nations.

In particular, Mr Lu said, helping to expand trade and investment links and spreading Chinese culture were two aspects that Hong Kong could make greater contributions to. “While the momentum of outbound investment in China is building up, Canada, a country rich in natural resources and advanced technology, is an ideal business partner. Hong Kong can bring the two together with its professional expertise, especially in the financial and legal services sectors,” he said.

He added: “As a unique city where Chinese and Western cultures have met and mixed for centuries, Hong Kong is well-positioned to be the bridgehead in spreading authentic Chinese culture abroad.” 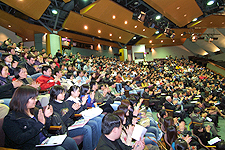 At the question-and-answer session that lasted for more than 30 minutes, many participants weren’t shy in asking tough questions, to which Mr Lu responded with poise, gumption and finesse. Some questions involved human rights, diplomatic relations and other delicate issues.

On a question about how Hong Kong could sustain its usefulness to China, Mr Lu said he understood that this was a question of highest concern among professional people in Hong Kong. “Since everyone is concerned, I am confident that you can find the most satisfactory answer to the question,” he said diplomatically. 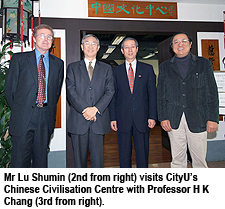 Mr Lu pointed out that Chinese civilization could span thousands of years because it was a culture that evolved by absorbing other cultures. At this point, he commended CityU’s Chinese Civilisation Centre for playing an instrumental role in spreading Chinese culture. During a visit to the Centre before the lecture, Mr Lu was impressed by the University’s endeavours to instill greater interest in Chinese culture and history among students and the general public through innovative course design and a resourceful e-learning web site. 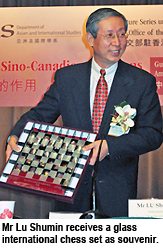 After the lively question-and-answer session, Professor Chang presented two souvenirs — a CityU book Chinese Civilisation: a source book that guides readers to appreciate Chinese culture, and an international chess board set that likens a geo-political board on behalf of the Department of Asian and International Studies — to the guest speaker as a token of appreciation. Professor Chang said: “Now I play the role of an ambassador representing the Department of Asian and International Studies, and hope that Mr Lu will appreciate these specially-intended gifts.” Mr Lu replied humbly that it was time for him to learn more about Chinese civilization and international chess.

At a tea reception afterwards, the amicable Mr Lu was swamped by guests and students who wanted to ask him questions or take pictures with him. He talked with them patiently for almost an hour before being ushered away by Professor Chang, Dr Lang and Professor Martin Painter, Acting Dean of the Faculty of Humanities and Social Sciences.

Mr Lu Shumin joined the Ministry of Foreign Affairs in 1976. He served in the embassies of the People’s Republic of China in Canada, Australia and the US. From 1994 to 1998, Mr Lu was Counselor, then Minister Counselor, in the Embassy of the People’s Republic of China in the US. From 1998 to 2002, he was Director-General of the Department of North American and Oceania Affairs of the Foreign Ministry. From 2002 to 2005, Mr Lu was Ambassador to the Republic of Indonesia, and since 2005, he has been Ambassador to Canada.