The Language Information Sciences Research Centre of City University of Hong Kong (CityU) released its 7th Annual Pan-Chinese Celebrity Rosters for 2006, which show that Mr Chen Sui-bian, President of Taiwan, has topped the list. Director of the Centre Professor Benjamin Tsou said, "The rosters consist of regional rankings of celebrities gaining most media exposure in each of the four cities: Beijing, Hong Kong, Shanghai, and Taipei; as well as the Pan-Chinese ranking covering celebrities appearing in all Beijing, Hong Kong and Taipei rosters. The results are based on the accumulative exposure from the bi-weekly rosters compiled by the Centre throughout the year." 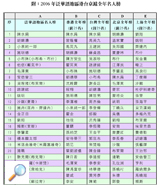 The statistics indicate that politics and sports consistently remain the hot talks among various Chinese communities throughout the year, with the former being the absolute majority. Chen Shui-bian, who was once only confined to regional rosters, comes first in the 2006 overall roster. Chen Shui-bian and his group appear to stand out, not only in the Taipei roster but also in Hong Kong, thanks to the series of political scandals, for which Chen's infamy has even surpassed Chief Executive Donald Tsang Yam-kuen's fame in Hong Kong. More interestingly, the coverage of Chen and Tsang by Hong Kong and Taipei media is not at all reciprocal. In contrast to such high profile, Donald Tsang, with his pragmatism, has not made it to the overall roster.

The Hong Kong roster maintains its characteristic attention to the show biz, starring the evergreen Andy Lau, the recovering Lydia Shum, the newly-wed Cecilia Cheung and others, but apart from that the show biz has given way to other fast tracks to fame, as all rosters are otherwise mostly studded with politicians and sportsmen. Shanghai has 17 out of the top 25 from sports, including the all-time favourites Yao Ming and Liu Xiang; and has an outlook which is much more international than Hong Kong.

Find full details of the various annual rosters at http://www.livac.org/celebrity/.