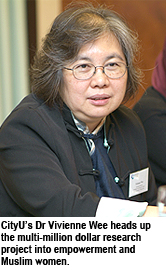 on the empowerment of women living in Muslim contexts, part of a multi-million dollar research project led by Dr Vivienne Wee, Associate Director of the Southeast Asia Research Centre (SEARC) at CityU.

CityU is committed to conducting applied sociological and anthropological research that seeks to establish Hong Kong as a regional hub for applied research in the social sciences.

The $53m project is entitled “Women’s Empowerment in Muslim Contexts (WEMC): Gender, Poverty and Democratisation from the Inside Out”. Key partners and advisors of the project will converge on Hong Kong this week for a conference on campus from 11 to 15 December. This meeting serves as the Inception Phase Workshop for the WEMC.

There will be progress reports on the project plus updates on cross-border research underway in China, Indonesia, Iran, Pakistan, Turkey, as well as research in the UK and elsewhere. 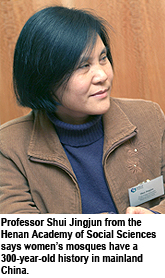 While there are several women’s mosques in mainland China, until now one in Hong Kong has not been called for. But shifting demographics are having an impact. In the last fifteen years, the population of Muslims in Hong Kong has almost doubled, and been feminized, due to the presence of at least 97,000 Muslim women from Indonesia, most of whom are in Hong Kong as domestic workers on short-term employment visas.

“Based on a survey conducted by SEARC with the International Social Service Hong Kong Branch in June, many Indonesian domestic workers feel that existing mosques in Hong Kong are insufficient to meet their needs,” Dr Wee said. “The mosques are generally dominated by men and the women’s prayer rooms in some of these mosques are extremely small, which means the women have insufficient space for their religious practices.”

In addition to space for worship, the Indonesian Muslim women also need

Dr Heyzer, Ms Shaheed, Ms Kassim and Dr Wee will participate in a panel discussion at a public forum on “Culture, women and violence” on 15 December.

The WEMC grant, worth $53m, will fund a five-year research project (1 July 2006 - 30 June 2011) on women’s indigenous strategies for empowerment in ways that can transform unfavourable power relations. It is funded by the Department for International Development, the UK government department that manages aid to developing countries.

The study will be carried out in Muslim communities and countries in four Asian sub-regions - East Asia, Southeast Asia, South Asia and West Asia.

According the Times Higher Education Supplement, CityU jumped 40 places to 53rd this year in the world’s top social science universities, emphasizing the regional importance of applied social studies at CityU.