The President's encounter with the Nobel Prize-winning novelist

“Mr Orhan Pamuk is a great writer. He is honest and offers his opinions freely, even though others might not agree with him. I know that he is a typical artist, full of ideas and full of confidence, and that his writings sometimes offend people, but I think he is sincere and genuine.”

This was the impression of the Turkish novelist Mr Orhan Pamuk that Professor H K Chang, University President, gave a student reporter in Bilkent University in Istanbul on 5 October. At the time, Professor Chang, who is planning and working on a collaborative general education course in Turkey, was unaware that Mr Pamuk was about to win the Nobel Prize in Literature.

Shortly after the interview with Bilkent News, Professor Chang heard the good news that his friend whom he had first come to know after reading My Name is Red had won literature’s greatest prize. Eager to pass on his good wishes, Professor Chang faxed off a congratulatory message—Mr Pamuk was teaching at Columbia University in the US at the time—from Cafe Hajji Baba in Istanbul where the two had first made contact nearly three years ago, also via fax.

“I was delighted to hear that one of my favourite authors, and, in particular, one of CityU’s distinguished lecturers, had received this great honour,” Professor Chang said.

Professor Chang first came to know Mr Pamuk after a friend recommended to him My Name is Red in the summer of 2003. Professor Chang, who has a long-standing interest in the history and culture of the Middle East, was deeply impressed by the novel. In a letter to Mr Pamuk, Professor Chang wrote, “When I read your book, I felt I had not only enjoyed a refreshing and inspiring novel but also learnt much more about the lives and thoughts of painters of miniatures in the 16th and 17th centuries.” Professor Chang was so absorbed in the novel during a family reunion in a cruise that he was dubbed ‘My Name is Red’ by his children and relatives. It was during that holiday that Professor Chang decided to visit Istanbul.

In January 2004 during the Chinese New Year, on the last day of his five-day visit to Istanbul, Professor Chang managed to meet with Mr Pamuk, who had just returned from India. The meeting inspired Professor Chang to write an article about his own venture into the Islamic art and history and his impressions of Mr Pamuk and the novel. The article “From Hajj Baba to My Name is Red: A Personal Journey” was published in the October 2004 edition of Ex/change, a publication of CityU’s Centre for Cross-Cultural Studies. A 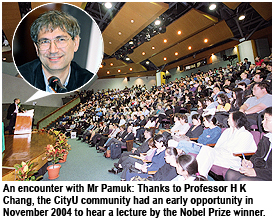 Chinese translation was published in Ming Pao Daily News in November and an abridged version was reprinted in the same paper on 14 October 2006. The Chinese version has also been published by a very influential intellectual monthly «讀書» as well as

«印刻» (INK), a similar magazine in Taiwan. What was more significant was that Professor Chang had brought the CityU community an opportunity for a brief encounter with the renowned Turkish writer.

At the invitation of Professor Chang, Mr Pamuk visited Hong Kong and gave the Distinguished Lecture entitled “The Making of My Name is Red” on 25 November 2004. That talk concluded the Distinguished Lecture series that celebrated the University’s 20th anniversary. In the lecture, Mr Pamuk talked about the making of the novel from the initial ideas and development to research and publication. The lecture inspired a spirited interaction between the author and the audience at the Wei Hing Theatre.

On the following day, 50 guests from all walks of life spent an enlightening evening with Mr Pamuk at one of the informal gatherings at the City Cultural Salon held at City Lodge, the President’s residence, during which participants learned about Mr Pamuk’s affections for Istanbul.

Thus Professor Chang not only brought Mr Pamuk to CityU, to CityU staff and students and to the local community, he also helped Chinese readers understand Mr Pamuk and his work more through frequent lectures and writings in Hong Kong, on the mainland and in Taiwan about Islamic history and art, about Mr Pamuk and My Name is Red.

Editor's Note: Please click Distinguished Lecture by Mr Orhan Pamuk to revisit the inspiring talk that took place in November 2004 or click “From Hajj Baba to My Name is Red: A Personal Journey” by Professor Chang about his interest in Islam and Mr Pamuk’s novel.