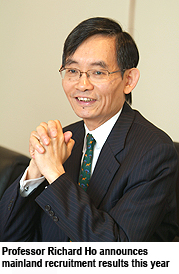 City University of Hong Kong (CityU) has successfully completed its admission exercise in 20 provinces/cities on the mainland this year. Both the quality and quantity of candidates are much higher than last year and the number of new mainland students who will begin their studies at CityU in September is expected to be around 210.

Many candidates admitted this year are top performers in NJCEES. Candidates admitted from Sichuan, Chongqing, Hunan, Guangxi, Yunnan, Fujian, Hainan and Hubei are the top 0.5% performers in their respective provinces/cities. These include, for instance, a student from Guangxi who ranks 99th in arts; two students from Yunnan who rank 88th in arts and 90th in science; and two students from Hainan who rank within the top 54 and top 88 in arts. Three single-subject champions have been admitted—two champions in Mathematics from Beijing and Zhejiang, and one champion in English (2) from Foshan. 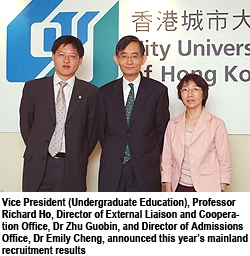 In Beijing, the average scores in arts and science are respectively 605 and 646, 73% and 27% above those of last year. The baseline scores admitted by CityU are close to those of Tsinghua University and Beijing University, and are on par with Shanghai Jiaotong University.

In Guangdong, due to the high baseline score obtained, CityU has attained the pre-selection status as enjoyed by top ranking institutions such as Tsinghua University and Beijing University. The average score admitted is 114 above the baseline, up 43% from last year. In Zhejiang, the average score in science admitted by CityU is up 30% on last year.

CityU participated in the recruitment campaign in Jiangxi, Guizhou and Yunnan for the first time this year and achieved excellent results by recruiting the most outstanding students. The scores of students admitted by CityU are similar to those students admitted to the nation’s top universities.

The admission results attained this year demonstrate that CityU has successfully built strong brand recognition among mainland students. In addition, some prominent developments can be observed in the overall admission exercise this year: an upward trend in average scores admitted in each province/city; candidates admitted within the target intake batches picked CityU as their first choice; all applicants achieved high scores; many of the newly admitted are top performers in academic subjects and are talented in arts, physical education, music, chess, calligraphy and photography.

CityU is promoting an internationalized education that enhances learning and personal growth among local and non-local students.