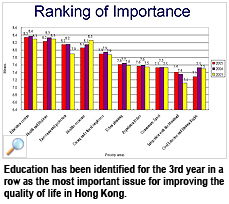 Education has been identified for the 3rd year in a row as the most important issue for improving the quality of life in Hong Kong, according to a survey carried out by City University of Hong Kong (CityU) in partnership with the Canadian Chamber of Commerce in Hong Kong.

The Department of Management Sciences in the Faculty of Business at CityU has compiled the Hong Kong Sustainable Development Index since 2003 to track community perceptions on the importance and progress of priority areas for sustainable development in Hong Kong. In the 3rd annual survey, conducted between October 2005 and February 2006, education maintains top position with health and hygiene and environmental protection ranked 2nd and 3rd, respectively.

In general, respondents said the restructuring of the education system (26%) and the quality of teaching (25%) were the major areas of concern for education. 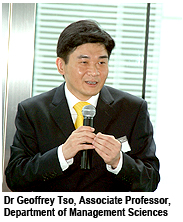 Dr Geoffrey Tso Kwok-fai, an associate professor in the Department, said the vigorous implementation of education reform over the past few years had made the public increasingly aware of the importance of education to their quality of life.

“Issues such as the downsizing of classes, closure of schools and benchmarking of English language teachers have become hot topics in recent years. This helps draw the public’s attention to issues such as the effectiveness of reforms and the quality of our teaching force,” Dr Tso said.

In the survey, 2,067 people aged 18 or above were interviewed by phone. Using a scale of 1 to 10 in ascending order, they were asked to rate the level of importance to sustaining, and their level of satisfaction with performances on improving, the quality of life locally in 10 priority areas of sustainable development. Respondents gave only 5.6 to the performance of education, placing it 8th in the rankings of satisfaction.

In descending order, the ranking of the ten priority areas is the education system; health and hygiene; environmental protection; a healthy economy; caring and ethical employers; urban planning; population policy; community spirit and well-being; integration with the mainland; and civil liberties and human rights.

Respondents were most satisfied with Hong Kong’s performance in health and hygiene (mean = 6.2 in 2005). This area has been ranked 2nd in the priority list for two consecutive years (mean = 8.2 in 2005, and 8.3 in 2004). Respondents said the major areas contributing to this were the cleanliness of public spaces (40%) and personal hygiene (26%).

Environmental protection has been ranked 3rd for the last two years. However, respondents’ satisfaction with efforts to protect the environment has decreased considerably since 2004, from the 5th to 9th place in 2005. In particular, 51% said clean air could help improve Hong Kong’s environment. “This indicates that people have become more conscious of the increasingly severe air pollution in Hong Kong,” Dr Tso said. 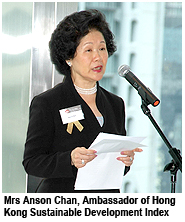 Speaking at a seminar that announced the results on 16 June, Mrs Anson Chan, the Index Ambassador, said sustainable development crucially depended on a genuine partnership between Government and all the stakeholders. “We must all rise to the challenge of finding ways to work together, to reach across traditional boundaries and barriers, to make personal sacrifices if necessary so that we can achieve our common goal of creating a Hong Kong that we can be proud to leave to our children and their children,” she said.

Other speakers included Mrs Anne Copeland Chiu from the Canadian Chamber of Commerce; Mr Dan Esty, Director of the Yale Centre for Environmental Law and Policy; and Mr Otto Poon Lok-to, a member of the Government’s Council for Sustainable Development, who talked about the importance of the Index and where Hong Kong stands among other world cities in terms of sustainable development.