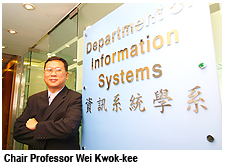 These achievements once again demonstrate the high quality of the professional education and applied research carried out at the University and exhibited on the international stage.

AIS, founded in 1994, serves as the premier global organization for academics specializing in Information Systems. It has chapters across , , and . The Association has selected only four fellows a year since 1999, recognizing individuals who have made outstanding contributions to the IS discipline in terms of research, teaching and service.

Professor Wei is the second academic from to receive this prestigious Fellow Award. Chair Professor Douglas Vogel, his colleague in the same department, was named an AIS Fellow in 2004.

“I am delighted to receive the Fellow Award as it rewards the efforts I have made in the past,” Professor Wei said. “I will try my best to strive for excellence in the future.”

Professor Wei received his doctoral degree in computer science from the in 1986 and joined CityU in 2002. In May 2005, under Professor Wei’s leadership, CityU’s Department of Information Systems ranked fifth in the world and first outside of in an evaluation of research publication productivity by the Communications of the Association for Information Systems.

Before joining CityU, Professor Wei was a professor in the and the founding Head of the Department of Information Systems at the National University of Singapore (NUS). As Head of two major IS Departments in the Asia-Pacific region (NUS and CityU) in the past decade, Professor Wei has developed a strong research culture and initiated major research that has put both Departments among the top 15 worldwide, according to the ranking in Communications of AIS (2005). 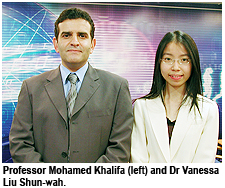 At the AIS conference, Professor Khalifa and his graduate student Dr Liu won the Best Paper Award in Conference Theme. Their paper, “Knowledge acquisition through computer-mediated discussions: Potential of semantic network representation and effects of conceptual facilitation restrictiveness”, was selected out of more than 70 papers. It demonstrates the superiority of a system designed by Professor Khalifa to support the exchange of knowledge between members of a knowledge community, and has important implications for corporate training, knowledge communities, communities of practice and e-learning.

The panel said the winning paper “has potential to make a major impact on knowledge acquisition and transfer” and is “a very interesting new frontier of the sort that is exactly appropriate to the conference theme”.

ICIS is the leading annual research conference in the information systems discipline. ICIS 2005 was held from 11 to 14 December in and attracted over 1,300 participants worldwide. Its theme was “Forever New Frontier”. Nearly 600 submissions were received this year and only 74 papers were accepted.