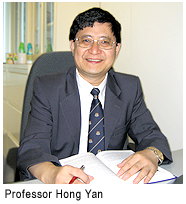 of the Department of Electronic Engineering (EE) at City University of Hong Kong has been elected Fellow of the Institute of Electrical and Electronics Engineers (IEEE) for 2006 in recognition of his outstanding contributions to image recognition techniques and applications.

Professor Yan is one of two academics in to be awarded the honour this year. CityU now has eight IEEE Fellows, seven in EE and one in the Department of Physics and Materials Science. Professor Yan’s election once again testifies that CityU researchers are attaining more and more international recognition.

IEEE is an international professional association with more than 365,000 individual members from 150 countries. Every year, less than 0.1% of its members worldwide are elected Fellows. The honour is conferred only on eminent scientists with exceptional contributions in their respective fields of electrical and electronic engineering.

Professor Yan received his PhD degree from and he is currently Chair Professor of Computer Engineering at CityU. Before joining CityU, he was Professor of Imaging Science at the . He was elected Fellow of the International Association for Pattern Recognition (IAPR) in 2000 for his contributions to document image analysis. He is also a Fellow of the Institution of Engineers, (IEAust) and a Member of the International Society for Computational Biology.

Professor Yan’s research results have found many applications in industry. He has already licensed his document image analysis and character recognition system and facial animation system to several companies in and .