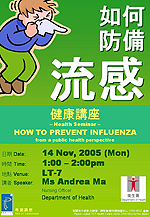 The Young Chung-yee Health Centre at City University of Hong Kong organized a health seminar on the prevention of influenza at the Lily Chiang Lecture Theatre on 14 November.

The seminar is part of a series of health-related activities at the University aimed at addressing the risk posed by a possible outbreak of avian flu. In September, the Centre also held the “Influenza Awareness Campaign” on campus.

These health awareness measures reflect the University’s caring culture and its readiness to consider contingency actions to combat a potential health crisis. 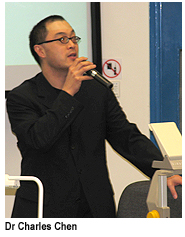 “The aim of the seminar was to enhance basic knowledge about the flu, a possible influenza pandemic and avian influenza,” said Dr Charles Chen, Doctor-In-Charge at the Health Centre. “We are calling on students and staff to build up good personal and environmental hygiene practices and to follow a healthy lifestyle in order to boost their resistance against communicable diseases.”

Dr Chen said that although the Government had activated the ‘alert’ level of the influenza pandemic response system, a mechanism set up to coordinate a swift response to an avian flu outbreak, people in Hong Kong should continue to lead a normal life.

Ms Andrea Ma, the Chief Nursing Officer from the Centre of Health Protection, Department of Health, covered many points related to the flu in her talk, and demonstrated the proper way to wash hands and wear a mask. In addition, she identified target groups that should get the influenza vaccination and explained in detail about the Government’s influenza pandemic response system.

Ms Ma said human and avian influenza were highly infectious viral diseases, but while influenza was common in Hong Kong, especially from January to March and from July to August, pandemics were rare.

The central issue now is that avian flu used to be confined to birds, but recently there have been confirmed cases of avian influenza infections among humans. “Because of the high death rate caused by the H5N1 virus, an avian influenza pandemic poses a real risk to humans,” Ms Ma said.

She urged students and staff to guard against the risk of being infected with influenza by taking preventative measures such as staying healthy; maintaining personal hygiene; wearing a mask if flu symptoms appear; avoiding contact with poultry and their droppings; and paying attention to Government guidelines and announcements.

Certain target groups such as health care workers who were prone to increased risks of influenza complications should get vaccinated, she added. 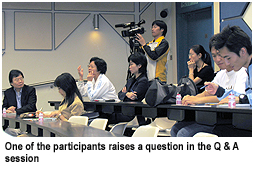 During the Q&A session, questions were raised about the effectiveness of wearing masks; ways to avoid catching the flu during business trips; details about influenza vaccinations; and whether a fever was the main symptom for the diagnosis of influenza.

Charis Lam, a Year 3 student from the Department of English and Communication, said the seminar was very useful. “It was really practical, particularly when the speakers talked about the proper way and best time to wash your hands,” she said. Information about getting vaccinations was also useful, she said.

The University has also set up an Ad-hoc Group on Prevention of Avian Flu. At its first meeting, the Group defined its roles and responsibilities, and discussed preventive measures and necessary emergency plans.

The Group has launched a website, called Campus Prevention of Avian Flu, which serves as a platform between the University and staff and students and provides up-to-date information from the Government, the Hospital Authority and related organizations.