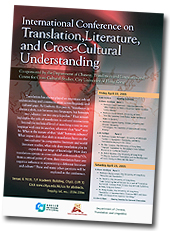 About 110 scholars from universities and research institutes in the region gathered at City University of Hong Kong (CityU) for the Asian Political and International Studies Association (APISA) Second Congress from 14 to 16 November. The aim is to explore and debate related issues on Asian governance under the theme “Governance dilemmas in : public action in a competitive and insecure world”.

Professor Ian Holliday, Dean of the Faculty of Humanities and Social Sciences and one of the co-organizers—the other two being Dr M Ramesh of the National University of Singapore and Dr James

Tang of the University of Hong Kong—said the Congress was an excellent opportunity to welcome scholars from all over Asia to CityU to debate the many political challenges now facing the region.

“Building on the success of the first APISA Congress, the second Congress again helps establish APISA as a major regional force in political science and international studies,” Professor Holliday said.

The Congress covers several disciplines taught in FHS and helps promote the internationalization strategy to which the Faculty and the University have long been committed.

In his opening remarks, Professor H K Chang, CityU President, introduced the spirit and values upheld by CityU as depicted in the two murals mounted on the walls of the entrance on the third floor to the Building.

“The murals exhibit a graceful combination of traditional Chinese cultural elements with Western means of expression. They are a fusion of East and West, Asian and Non-Asian, the old and the new,” Professor Chang said.

The murals demonstrated the University’s commitment to modern professional education, buttressed by deep-rooted humanistic values, and illustrated the technological competence and cultural literacy that underpin CityU’s persistent drive to “nurture and develop students’ talents” and to “create applicable knowledge”, he added. 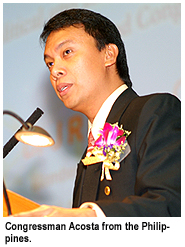 Two plenary speakers, Dr J P Nereus O Acosta, House of Representatives in Congress of the Republic of the , and Professor Anthony Cheung, Department of Public and Social Administration at CityU and a non-official member of the Executive Council, HKSAR, were invited to address the Congress.

Congressman Acosta, speaking on the topic “Leadership, institutions and democracy”, said that conflicting views about governance helped motivate people to identify new ways to change and improve our lives.

In his address, Dr Acosta highlighted some major areas of interest—economy vs ecology, and efficiency vs transparency—that the authorities concerned and/or scholars should pay more attention to. 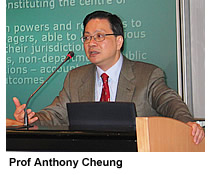 In his presentation entitled “Hong Kong’s governance: continuity and change”,  Professor Cheung spoke about the changes to Hong Kong’s political and governance system that had taken place since Hong Kong entered the transitional period to become a special administrative region of China. He also examined the transformation of the local civil service.

In this three-day event, 35 panel sessions will cover a range of issues and topics related to governance in different parts of . E-Government, environmental politics, contemporary Chinese and politics and governance are some of the issues being discussed.

APISA was created in November 2001 when a group of scholars from around the region agreed to launch an Asian-based organization dedicated to the advancement of political and international studies.

APISA, as an independent, non-governmental, non-profit organization, aims to promote research, teaching and publication of political and international studies in and on . It also seeks to disseminate research findings, institutional skills and syllabi, and to promote cooperation and academic exchange between individuals and institutions.

The First APISA Congress was held in in November 2003. Its theme was “ in the new millennium: development, democracy and security”.