Graduates possess the colours to paint a beautiful picture of life

City of is holding its 2005 Congregation from 8 to 11. This year, through its provision of quality professional education, CityU has nurtured 5,296 graduates. The Community College of City University (CCCU) will also confer 2,166 associate degrees to its first batch of graduates at its Congregation on 15 and 16 November.

In total, there were 99 doctorates, plus one engineering doctorate; 72 master of philosophy degrees; 1,340 master’s degrees; 228 postgraduate diplomas/certificates; 3,093 bachelor’s degrees; and 463 associate degrees.

Using the two murals on campus to illustrate the spirit of our university, Professor H K Chang, University President, in addressing the Congregation, also made mention of Albert Einstein and the introduction of a modern education system in 100 years ago to underline the importance of a broad knowledge base and a broad-based curriculum. (Full-text of President's address)

The murals at the entrance of CityU’s show the University’s commitment to modern professional education, buttressed by deep-rooted humanistic values, Professor Chang said. The paintings graphically illustrate the technological competence and cultural literacy that underpin the university’s persistent drive to nurture and develop the talents of students and to create applicable knowledge. These are in line with the University’s mission adopted in August this year.

A broad-based curriculum offered by CityU is needed to produce ideal graduates who are equipped with a range of disciplines and skills, including computer literacy and language proficiency.

Indeed, providing students with a broad educational background is like equipping them with different colors for the painting of life. Professor Chang told the graduates: “In front of each of you is a clean canvas. CityU has prepared you with the colors. Use them creatively. I am sure you can paint a beautiful and brilliant picture out of your life.” 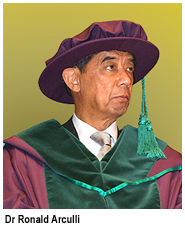 Dr Ronald Arculli has a vision to build a caring and prosperous society, in which people are guaranteed a decent living and self respect. Through participation in ’s governance, he wishes to bring about more responsive public policy and law making. He has served on numerous government committees, statutory boards and advisory bodies, both locally and internationally. Last month, he was appointed a member of the Executive Council. He received an Honorary Doctor of Social Science. 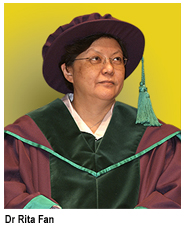 Dr Rita Fan began her political career as a Legislative Councillor in 1983. As the President of Hong Kong’s highest law-making authority, she understands her role in upholding the principle of free deliberation while, at the same time, maintaining order and due procedure to be essential to the long-term stability of our political system. She was conferred an Honorary Doctor of Social Science. 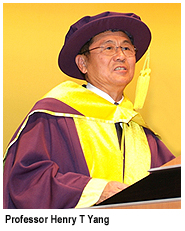 In recognition of Professor Henry T Yang’s outstanding contributions to the field of engineering as well as his excellent achievements in educational leadership, he was conferred an Honorary Doctor of Engineering. He said it was a great honour to receive an honorary degree from CityU. In his acceptance speech, he noted that CityU had been ranked recently in the top 200 universities in the world by The Times Higher Education Supplement in . He said that this achievement exemplified Professor Chang’s patient and tireless pursuit of excellence. 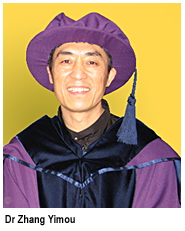 From Red Sorghum (1987) to House of Flying Daggers (2004), Dr Zhang Yimou has continued to win prizes and attract controversial reactions, yet he remains the most famous Chinese director. Although he is grateful for the prizes and his popularity, what he appreciates most is an audience that loves his movies and understands him through these movies. He was conferred an Honorary Doctor of Letters. 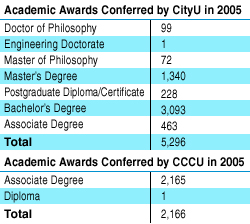 Graduate representatives share their CityU experiences on behalf of their fellow graduates at different sessions of the Congregation. One of the graduates, Ms Chong Chor-man of the , said the School has broadened her horizons and given her a lot of opportunities to train and better equip herself for both professional and personal life. “What if I hadn’t put that little tick on my JUPAS form for the ? What would I be doing now? I really have no idea, but I’m sure I wouldn’t be the same person I am today,” she said.