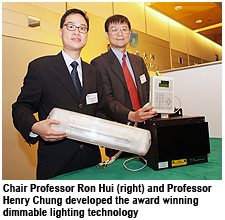 A novel dimmable lighting technology developed by researchers at City University of Hong Kong has been awarded the "Best New Product 2005" by the Australian Electrical and Electronic Manufacturers' Association (AEEMA).

Winning this prestigious international award once again demonstrates that CityU’s achievements in scientific research are recognised by industry throughout the region.

The new technology can dim a range of existing "non-dimmable" lighting networks for both indoor and outdoor applications. It can cut electricity consumption by 20 percent to 30 percent, which leads to lower carbon dioxide emissions, which, in turn, helps relieve global warming. It is estimated that the technology has the potential to reduce global electricity consumption by at least one percent. 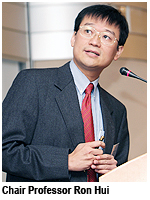 "I'm glad that our dimmable lighting technology has received recognition from AEEMA because is a country that attaches great importance to environmental protection," he said.

The breakthrough technology can reduce electricity consumption by turning "non-dimmable" electromagnetic ballasts into "dimmable" ones. This helps reduce the use of electronic ballasts, which have a shorter lifetime than electromagnetic ones and have become a source of toxic electronic waste.

Professor Hui said he had been invited to attend seminars in later this month to introduce the technology to government officials and energy experts. A patent for his design from the had been obtained recently, he added.

Through the support of e.Energy Technology, a CityU associated company, the technology has been applied to a number of lighting systems in commercial buildings and car parks. In province, it is used to control more than 7,000 street lamps.