CityU stakes out in Shenzhen's "Incubation-Education-Research base" 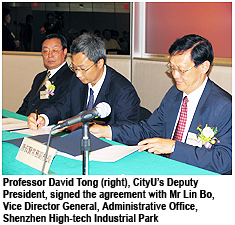 City University of Hong Kong  signed an agreement with the Shenzhen Municipality Government today (6 September) to enter the “Incubation-Education-Research base for Hong Kong universities”, which is based in the Shenzhen Virtual Univesity Science Park, bringing CityU’s Shenzhen Outpost one step closer to fruition.

This new agreement demonstrates CityU’s determination to help advance the economic development of and the Delta through R & D and quality education services.

CityU is in the process of acquiring a 6,000 square metre site within the “Incubation-Education-Research base for universities” to establish its 12,500 square metre Shenzhen Outpost. This will be a base for CityU’s applied research, incubation and teaching activities on the mainland. The signing of the agreement furthers the cooperation between CityU and the . 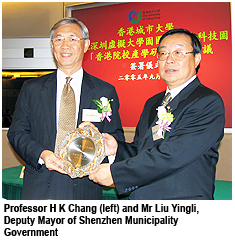 Mr James Ng, Executive Director of CityU Extension, said that the University hoped to construct a building featuring environmental and high-tech designs that would become one of the most outstanding landmarks in the Shenzhen Virtual University Park. “Through the establishment of the Shenzhen Outpost, we look forward to bringing the dynamic, innovative spirit of CityU to Shenzhen and we can interact constructively with the wealth of talent there,” he said. 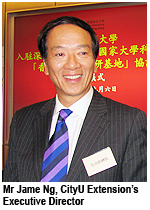 CityU has a successful track record in applied research and the commercialization of technology startup companies on the mainland. Since 2000, CityU has established the Shenzhen Research Institute and three applied research centres - the Biotech Research Centre, the Environmental Mangrove Research Centre, and the Industrial Technology Research Centre - in the Shenzhen Virtual University Park. A number of companies established under CityU Enterprises Ltd to promote the University’s research and technologies to industry have made an impact in the Pearl River Delta region with successful incubation activities.

The is a science park project approved by the Ministry of Science and Technology and the Ministry of Education. It aims to provide an environment conducive for universities and research institutes to carry out research and development; to conduct manpower training; and to incubate hi-tech start-up companies in Shenzhen. The “Incubation-Education-Research base for universities” has been set up in the to facilitate universities to carry out these activities.

CityU plans to establish “incubation-education-research” base in Shenzhen