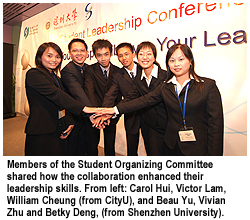 With the theme "Your Responsibility, Your Leadership", City University of Hong Kong has joined hands with Shenzhen University to host the sixth Student Leadership Conference (SLC). More than 130 university students from 32 universities all over the world convened at the two campuses from 26 July to 3 August to discuss issues on leadership. With an aim to foster links among university students worldwide, the SLC exemplified CityU's commitment to broadening students' global horizons and training ethical leaders for the future.

This is the first time CityU has invited a mainland partner to co-organize the conference. Geographically adjacent, and Shenzhen share similarities in their economic development, but how about the ways of thinking of university students? "By cooperating with students from a different city, university students can sharpen their thinking through exposure to a different set of values and different cultures," said Mr Theseus Leung, Senior Counsellor of CityU's Student Development Services (SDS). "Instead of solely emphasizing competencies and capacity enhancement, the SLC this year also advocates a better balance with responsibility that r 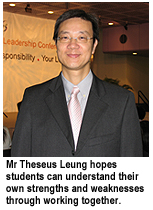 aises student leaders' awareness of humanitarian concerns and contribution to the community."

The SLC also aims at enhancing participants' leadership skills through actively involving them in organizing the programmes. In early 2005, a Student Organizing Committee (SOC) comprising both CityU and students was formed to participate in designing the themes, marketing and logistics of the SLC.

"We realize that students in the two cities have differences in terms of language and ways of thinking and communication. Only through mutual understanding could we join hands for a common goal," said William Cheung, a CityU student and co-chairperson of the SOC. From his experience in the past few months, William learned that a leader should possess a clear vision, confidence and a strong sense of commitment. 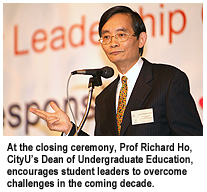 This year's SLC started in and moved to CityU on 31 July. With the sub-themes "Sustainable Development", "Humanitarian Concern" and "Student Leadership Development", it featured a series of workshops, seminars, forums and enterprise visits. Prominent leaders from and the mainland were invited to share their wisdom on leadership. They included: Mr Henry Y J Han, Regional Manager of Southern China, Apple Computer Inc; Ms Christine Fang, Chief Executive of the Hong Kong Council of Social Service; and Ms Shalini Mahtani, a recipient of the HKSAR Chief Executive's Commendation for Community Service 2005 and Founder and Chief Executive Officer of Community Business.  At the closing ceremony held at CityU on 2 August, Professor Richard Ho, CityU's Dean of Undergraduate Education,

expressed his gratitudes to and all the participants for making the SLC a great success. He encouraged student leaders to take up the challenges in the next decade and lead the new generation to reach the highest mountain.

Launched by CityU's SDS in 2000, the SLC has provided training for more than 700 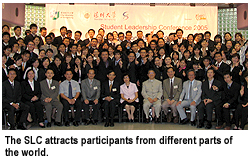 university students. Members of the Student Organizing Committee have opportunities to gain experience abroad. CityU student committee members visited the of and in April to study environmental protection issues in . In the coming years, SDS will invite overseas universities to co-host the conference to further enhance the international perspectives of students.