Students win scholarships for excellence in the Spanish language 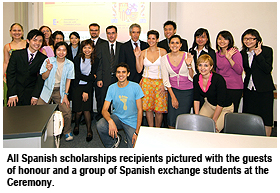 Eleven students received scholarships from the Consulate General of Spain, the Spanish Chamber of Commerce and CityU’s Faculty of Humanities and Social Sciences (FHS) at the Spanish Awards and Scholarships Ceremony held on 22 June in recognition of their academic excellence in learning Spanish.

“It is our great honour to present the awards to outstanding students who not only have attained a high level of proficiency in the Spanish language but also demonstrated strong enthusiasm in exploring the Spanish history, people, and above all learning how to appreciate a different culture,” said Mr Camilo Alonso-Vega, Consul General of Spain in Hong Kong and Guest of Honour of the Ceremony.

“In today’s world, proficiency in Putonghua and English is not adequate to cope with the multi-cultural business and social environment,” said Miss Jessica Pun, winner of the Best Spanish Student Award. “Learning Spanish, which is the third most spoken language in the world, can enhance my communication with people all over the world,” she said.

Miss Pun is a final-year student of the Department of Computer Science taking Spanish as an out-of-discipline course. She reflected that in addition to improving her language skills, the Spanish course has provided her with lots of opportunities to learn the Hispanic culture. She will use the cash prize of US$2,000 for a study trip to this summer. After returning, she will present a report about her student exchange experience to the General Consulate of to help promote Spanish culture in . 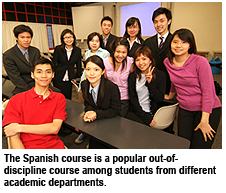 Other guests of honour included Professor Ian Holliday, Dean of the Faculty of Humanities and Social Sciences, and Mr Angel Garralda, Instructor of the Department of English and Communication (EN). “The Students’ outstanding performance in learning Spanish demonstrates that they are multi-talented and have a strong curiosity to learn,” said Professor Ian Holliday. “The knowledge they acquired can complement their major study and sharpen their ways of thinking. That will be a great advantage for their future career.”

Introduced as an out-of-discipline course by the EN in 2001, the Spanish course attracts more than 400 students from different disciplines every year. Mr Garralda is the academic staff member who started the course in CityU, and with the support of the Spanish teaching team, he has developed the website “Spanish Learning and Culture” (www.cityu.edu.hk/en/spanish) to facilitate Spanish learning via the Internet. Mr Garralda is one of the University’s Teaching Excellence Awards winners in 2004-05 and was recently elected Board Director of the Spanish Chamber of Commerce in .