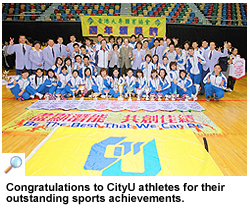 CityU athletes displayed their prowess, clinching the Men's Overall Champion and Women's Overall Second Runner-up titles in this year's Hong Kong Post-Secondary Colleges Athletic Association (HKPSCAA) competitions (see table below). Alex, Chung Kwok-leung, first-year student in the Division of Language Studies, was elected Sportsman of the Year by the HKPSCAA. In the past 10 years, CityU has won a total of eight Men’s Overall Championships; both our men’s and women’s teams won championships in overall standing in the 1996-97 and 2000-01 annual inter-collegiate competitions. 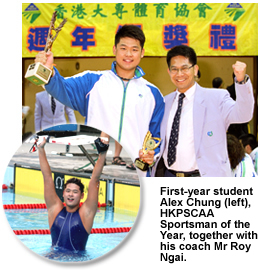 Alex Chung not only won championships in the 200m and 400m free-style swimming, he also broke the HKPSCAA records in both events. Alex was excited about contributing to CityU’s outstanding sports achievements. “I tried my best to prepare for the competition, which I regarded as a challenge to improve myself. I am very glad to have supportive teammates. We often encouraged one another. Friendship is a precious gift as important as the gold medals for me,” Alex said. He was admitted to CityU through the Student Athletes Admission Scheme in 2003. Also a Hong Kong Swimming Team member, Alex set the record for three local swimming events. He has represented in a number of international swimming competitions.

Arduous training has paid off for CityU’s athletes. Credit for their success lies not only in excellent individual performance, but also on team spirit. The success of the Badminton Team is a good illustration of the importance of teamwork. “It means a lot for the Badminton Team to win this year,” said Mr Sunny Chau, CityU Badminton Coach. “Our competitors were tough. And in the course of the competitions, one of our core members was injured in an accident and had to retire. The morale of the whole team dropped to an all-time low. But they didn’t give up. On the contrary, they quickly recovered, planned a new strategy and continued their intensive training. They displayed strong willpower and outplayed their opponents in the end.”

CityU emphasizes skills training, but stresses whole person development for the University’s athletes. “Be the best that we can be” is the motto of CityU’s sports teams. The University aims to help its students excel, not only on the playing field, but also in different aspects of life.