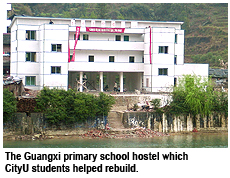 Over 30 students from the Department of Building and Construction (BC) put their knowledge into practice and volunteered to participate in a student hostel redevelopment project for a remote primary school in Guangxi province. The name of the new hostel is based on CityU’s motto “敬業樂群” (Officium et Civitas) to mark the contribution and effort made by CityU students. The new hostel was completed in late March this year.

The BC students developed friendships with the teachers and students of the Guangxi primary school in while taking part in the project. After the new hostel was in place, CityU students initiated other activities such as fundraising for the school’s library, a pen pal project and a mentoring scheme, to sustain their relationship with the Guangxi students. 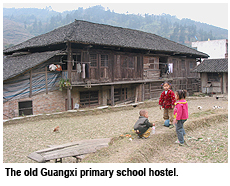 The reconstruction project kicked off in mid-2004. Under the guidance of environmental officials in Guangxi and staff members of the primary school, the BC students helped draft the initial reconstruction plan, working on details of construction work, monitoring the reconstruction progress and conducting field supervision. They were able to apply fully what they learned from books to the real-life situation.

This volunteer project was a golden opportunity for the personal growth and whole-person development of the participating CityU’s students. “I am glad to see that the project has morphed from a reconstruction programme into a programme of caring,” Mr Samuel Lam, a student volunteer, said. “I find that I have gained more than I have given. My interpersonal skills have improved, too.” Another volunteer, Miss Ronnie Tam, said that she found happiness in helping others. Miss Grace Cheng, BC Instructor, who coordinated the project, was impressed by the students’ dedication, despite their heavy academic commitments. 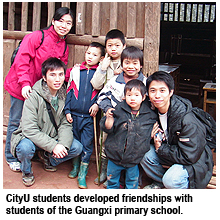 One of the project supporters, Mr Nicolas Yeung, Founding Director of Construction Industry Institute – Hong Kong (CII-HK), came up with the idea of rebuilding the Rongshui county primary school hostel while he was traveling in poverty-stricken minority regions of Guangxi. Not only did he want to improve the education facilities in the area, he also wanted to provide CityU’s BC students with an opportunity to apply what they had learned in class. Through the concerted efforts of Mr Yeung, Professor Andrew Leung, BC Head, and BC staff and students, the dream of alleviating poverty in a Guangxi minority region finally materialized in the form of the primary school hostel rebuild project.