A dialogue with secondary school principals

Professor H K Chang and Professor Edmond Ko, CityU President and then Vice-President (Undergraduate Education),  respectively, opened a dialogue with over 20 secondary school principals and career masters on the unique education philosophy and experience at City University of Hong Kong. The dinner gathering, held on 23 March, was an initiative of the Community Relations Committee under the Council to enhance understanding between CityU and the secondary education sector.

CityU is the right choice

Professor Chang kicked off the gathering by recapping the 2002 Education and Manpower Bureau (EMB) survey in which CityU graduates ranked top in IT literacy, and telling anecdotes of students who were not so happy about

coming to CityU first, but later were convinced that they had made the right choice. “CityU pays personal attention to students. We put students at the centre of our education philosophy and I think this is what distinguishes us from other universities,” Professor Chang said. He attributed the students’ transformation to the dedication of staff members. “Come to our campus and I will tell you more about the ‘blood, sweat and tears’ of our staff,” he urged the school representatives.

The philosophy of “student-centred” education drew emphatic responses among the school principals. Ms Lisa Yip, Principal of Shatin Tsung Tsin Secondary School, echoed, “I always believe in student-centred education.” She said that she was highly impressed by the level of IT literacy among CityU students as reflected in the EMB survey. She and some other school principals at the gathering shared the 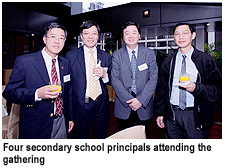 concerns and anxieties of secondary students in choosing undergraduate programmes through the JUPAS. Many of them asked about the admission system and requirements at CityU. One participant suggested CityU provide guidance and counseling services for secondary school students interested in applying for entry into the University’s programmes. Mr Lee Kwok Keung, Career Master of (), said that he would advise students to actively seek information from relevant faculty members for the programmes in which they are interested. Mr Oscar Tam, Principal of Maryknoll Fathers’ School, remarked that he has always been impressed by the level of energy on the campus when he visits CityU. At this gathering, he said he was impressed by the dedication of the staff as reflected in this event. 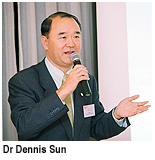 The Community Relations Committee, chaired by Council Member Dr Dennis Sun, seeks to promote a positive image of the University and communication with the community. It also undertakes fundraising campaigns for the University. The Committee, which meets four times a year, has identified as target groups secondary schools, employers and alumni. In its first meeting, the Committee discussed the issues of the University’s image, positioning and branding. In the second meeting, thanks to co-ordination of Committee Member Mrs Stella Lau, the Principal of Diocesan Girls’ School, more than 20 principals and career masters from local secondary schools gathered with the senior staff members of the University to gain a better understanding of CityU.

Professor Ko’s introduction of CityU, its ideal graduates and its philosophy marked the highlight of the evening. He acknowledged that the students recruited at CityU are “perhaps academically less prepared”, but the 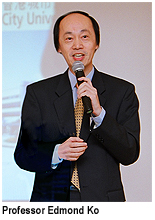 University makes sure that by the time they graduate they have become “internationally competitive”, with high moral standards and proficiency in communication. CityU attends to the needs of first year students to help them adapt successfully to university life. Professor Ko has summarized his tips and advice for these young people in his book Ten Important Things for New Students, which he gave to each participant of the gathering as a token gift. “By and large, I think what defines CityU is our commitment to student development, both professional and personal,” he said.

Mrs Stella Lau concurred, “From what I know of the programmes CityU delivers, I am touched by the extent of professor-student interaction there. 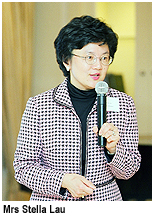 The staff realise that because of the students’ backgrounds, the students require more personal attention and they are happy to deliver that. This is what makes CityU a choice, in my opinion.”

Five CityU students were invited to join the gathering. They were there to share their personal experience of the value-added and student-centred education at CityU. Devin Sio of the Department of Management is a first-year student who has settled in to a happy life at CityU. He said the approachable style of professors in his department soon made him feel at home. He is now actively involved in campus life, taking up leadership roles such as being a class representative. “When I first came here, I was not so happy, but now I am proud to be a CityU student,” he said. 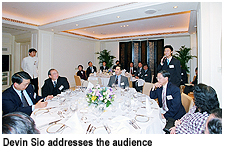 Delivering his note of thanks to all the guests, Dr Sun, the host of the evening, remarked, “A good university transforms students, whatever their backgrounds. I believe CityU professors will deliver what they promise.”