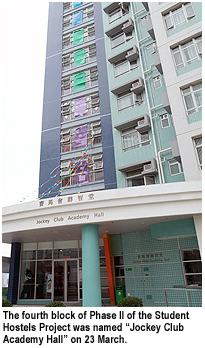 “The success of the Student Hostels Project comes through the support of the Government and friends of the University who have supported the various fundraising endeavours organised by staff, students and alumni,” said Professor Chang at the ceremony. “Above all, we are particularly grateful to the Hong Kong Jockey Club Charities Trust for its unstinting support.” Professor Chang looks forward to future occasions when CityU can work in close partnership with the Hong Kong Jockey Club to further develop higher education in .

In his speech, Mr Cheng said that the Jockey Club was pleased to support the University’s academic-related projects as well as the construction of the student hostels. The Hong Kong Jockey Club Charities Trust has donated over HK$180 million to CityU, including over HK$125 million towards the three phases of the Student Hostels Project.

“We believe the benefits that hostel life can bring to students are substantial; for instance, ample opportunities to interact with students of different disciplines and greater participation in academic and extra-curricular activities,” Mr Cheng said. “Through these, students can develop interpersonal and communication skills as well as leadership qualities, all of which are as important as academic achievements.” 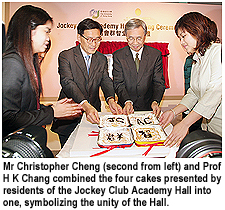 CityU recognises the vital role of the student hostels in upholding the Whole Person Development philosophy in education. Hostel life enables students to reap the full benefits of campus life and enrich their university experience. "With the hostels, CityU welcomes international and mainland students who give local students a chance to mingle with students from different backgrounds and thus broaden their horizons," Professor Chang said.

By further enhancing the undergraduate educational experience and advancing internationalisation, he added, CityU would further fulfill the role statement it received from the University Grants Committee (UGC) in early 2004. "The role statement, which gives CityU the mission of providing internationally competitive undergraduate education and applied research, coincides with the University's strategic plans that pledge to align all our academic activities along the dual axes of professional education and applied research," Professor Chang said. CityU has been developing in this direction over the last 20 years and has done a lot to educate the youth of Hong Kong and extend its name both within and beyond Hong Kong. 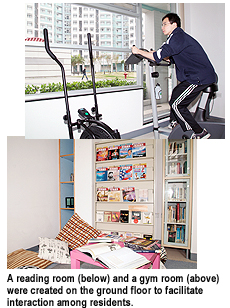 The Jockey Club Academy Hall, opened to students in March 2004, has 15 single and 161 double rooms, providing a total of 337 bed places. The Hall promotes a free and energetic ambience which facilitates students’ intellectual development and self-governance. In order to promote the active participation of students, the first Residents’ Association was formed in November 2004 and a gym room, an AV room and a reading room were created on the ground floor to facilitate interaction among residents.

The Student Hostels Project, developed in three phases, comprises nine blocks of residential buildings with 2,878 bed places and three multi-function halls. Phases I and II of the projects are complete and open for use. Blocks seven and nine of Phase III are scheduled for completion in September 2005. In recognition of the donations from business corporations, Block I was named the Jockey Club Humanity Hall and Block 2 the HSBC Prosperity Hall in 2003 and 2004, respectively.