CityU adheres to its role statement 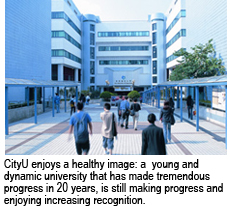 At the Senate meeting on 15 March, Professor H K Chang, President, reiterated that CityU has been developing in line with the role statement it received from the University Grants Committee (UGC) in January 2004.

The role statement coincides with the University’s strategic plans which set out its mission to align academic activities along the axis of professional education and applied research. “The University community has welcomed the role statement and is determined to carry it out,” Professor Chang said.

In a recent letter to the UGC, the University reaffirmed that it has fully embraced the role statement and that, over the next two years, it will demonstrate clearly that it adheres strongly and closely to the role statement. In a move to fulfill this goal, and at the suggestion of the UGC to benchmark with the type of universities CityU aspires to be, the President will lead a delegation to visit universities in the and other European countries. “CityU is young and there is a need to learn how other universities manage and build their resources and how they strike a balance between research that creates knowledge as opposed to research that is strictly application-oriented,” Professor Chang observed.

Ever since its establishment, CityU has focused on the pursuit of excellence consistent with its vision: “City University of Hong Kong aspires to be internationally recognized as a leading university in the Asia-Pacific region”. “With the diligent efforts of our staff, we have not let our founders down and we have partially achieved that vision,” Professor Chang said. “The good work of CityU staff has earned the University respect.”

Professor Chang said the image of CityU is very healthy. “CityU is recognized as a young and dynamic university that has made tremendous progress in 20 years, is still making progress and is enjoying increasing recognition,”  he said. CityU students, for instance, are winning awards locally and internationally and earning praise from employers. The University’s academic programmes, too, are recognized.  A number of independent institutions that conduct objective ranking surveys have rated CityU highly. The Faculty of Business, for example, has recently been accredited by the Association to Advance Collegiate Schools of Business, an international organization that accredits business schools over the world. “Staff, of course, feel encouraged by the recognition and should be proud,” Professor Chang said. “When CityU receives accolades, our alumni take pride in their alma mater. It certainly can bring benefits to their careers.”

Although some people may not understand the dynamics among the University's drive, its mission and vision and how the perceptions of the public affect the feelings and fate of students and alumni, Professor Chang stressed that the University works for the benefit of its students and for society. At the same time, there is no reason to reject acclaim earned along the way. 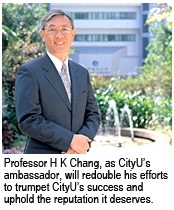 Since December 2003, with his appointment as Deputy President, Professor David Tong, together with the Vice-Presidents and Deans, has helped share the President’s academic workload. While the President concentrates on CityU’s activities on the mainland, international expansion and preparation for the four-year curriculum, Professor Chang has also assumed the role of ambassador for the University. As such, cultivating the image of CityU is one of his major tasks.  “I intend to redouble my efforts as CityU’s representative," Professor Chang said. He also added that, he would, on any occasion, trumpet the University’s success and safeguard its image from discouraging remarks.

“As I said at the University’s 20th anniversary, until we celebrate our 40th anniversary we cannot be truly proud of our University. I recognize that we’re young and have shortcomings; we haven’t yet become a great university,” he said. “However, what we have accomplished together thus far is remarkable and motivates us to advance further in the direction we are already heading.”