Hidden dragons and crouching tigers greet the year of the rooster 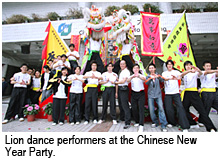 In the warm afternoon of 15 February, more than 1,000 staff members took a break from their work and rejoiced at the Chinese New Year Party, held at University Circle and in Chan Tai Ho Multi-purpose Hall. One distinguishing feature of the year of the rooster celebration was a staff talent contest, “City Talents Arena”, during which the contestants' spectacular performances inspired the President, Professor H K Chang, to compose a couplet on the spot.

After watching nine staff performances, including Peking opera, a Chinese sword and ribbon dance, Karaoke songs, a vocal solo, a violin and piano duet and an imitation of pop singers, to name but a few, Professor Chang expressed his aspirations for CityU in his Chinese couplet: “喜今日獅子山下藏龍

卧虎，待他朝太平洋濱吐氣揚眉”. He explained the meaning in English as: “Pleased to see under the Lion Rock today there are hidden dragons and crouching tigers; by the side of the another day, I expect we will exhibit pride and exuberance.”

Indeed, the Chinese New Year Party was an exuberant affair for all the staff in attendance. They were treated to a sumptuous lunch buffet, watched a  lion dance at U Circle, enjoyed the talent contest and nabbed red packets distributed by senior staff members, four of whom were decked out in costume as Chinese gods of wealth. Those whose 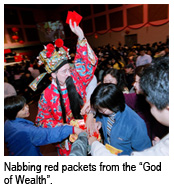 numbers were chosen in the lucky draw received prizes ranging from an MP3 player and digital cameras to a “Golden Rooster” and red packets, some of which contained over HK$2,000. Staff also received warm wishes from the President: “I wish all CityU staff and their families good health and satisfaction in their work...  CityU staff is devoted to helping our students grow into forces for the betterment of society. This year, as ever, we will do well—emphasize student-centred teaching at international standards. We will conduct applied research in fields that are relevant to ’s 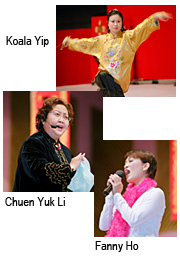 social progress and contribute to the larger body of knowledge. This is CityU’s mission now, and in the future.”

The organizers of the joyous occasion, the Human Resources Office, introduced the talent contest for the first time. Nine participants and teams contributed to this highlight of the party. The winners were: Ms Chuen Yuk-li (Division of Language Studies), Champion in Solo and the Best Award in Individual Style; Ms Koala Yip and Mr David Cheung (), Champion in Group and the Best Team Award; and Ms Fanny Ho (Communications Office), winner of the Best Creativity Award.