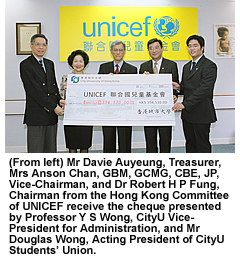 The University community has supported the fund-raising campaign jointly organized by CityU and UNICEF with great enthusiasm, raising a total of HK$354,530 between 6 and 14 January, to provide education kits for tsunami-affected children. This is a record amount collected by a CityU-wide donation campaign to date. 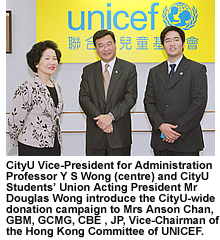 On behalf of UNICEF and the tsunami-affected children, Mrs Chan thanked CityU for its generous contributions and support. “We sincerely thank each and every donor for his/her act of kindness. No matter how much one has contributed, whether it is $50 or $500,000, it is equally valued by us," Mrs Chan said. "The donations have played an important role in recovery efforts. UNICEF will make the best use of every amount received to help the suffering people restore their lives.”

“As an educational institution," Professor Y S Wong said, "CityU is concerned about children’s development, especially their educational and developmental needs. I have been impressed yet again by the spirit of solidarity and the compassion demonstrated by the University community in lending a helping hand to suffering children."

Mr Douglas Wong expressed appreciation for the students’ enthusiasm. “We never lack student helpers. Our challenge is how to better coordinate the many students who have volunteered to help,” he said. “In addition, I am moved by the generous contributions made by our students; some of them even donated more than once!”

Shortly after the tsuami took place in , CityU set up a Support Group with members from different departments and representatives from Students' Union and Staff Association. The Group also mobilized various units within the University, including the CityU Postgraduate Association, and suggested partnering with UNICEF to organize the University-wide donation campaign.

Although the donation drive via cheque / cash / direct deposit to bank account has ended, CityU staff can still make donations through deductions from salary by completing a Salary Deduction Form and returning it to the Finance Office on or before 7 February. The University will deliver the amount received after 14 January to UNICEF and announce the final grand total of the proceeds at a future date.

CityU and UNICEF join hands to care for tsunami-affected children