Twelve students from the Division of Language Studies (LS) received scholarships at the 3rd Korean Scholarship Award Ceremony, 18 May. They will be sponsored to take a four-week intensive Korean Language and Culture Programme at the this summer.

At the presentation ceremony, LS Lecturer Ms Kang Kim Hyewon, co-ordinator of the event, delivered her vote of thanks to the sponsors: Kyung Hee University, the Korean Residents Association of Hong Kong, and LS. Both the Kyung Hee University and Korean Residents Association of Hong Kong, which sponsored a total of five awards this year, have supported the scholarship programme since 2002, when it was initiated to motivate excellence in the learning of Korean language, and to recognize achievements of outstanding students.

“The intensive summer programme covered by the scholarship will give me more chances to practice Korean, and enable me to have a better understanding of the Korean culture,” said Kevin Pan, one of the scholarship recipients, who delivered his speech in Korean. He also spoke of his aspiration to pursue postgraduate study in , after he finished the undergraduate programme in translation and interpretation at CityU. All the recipients have undergone a vigorous selection process. Good course work record in at least two of the Korean courses is a prerequisite. After screening, selected students are required to submit a written application in Korean. Then they are invited to an interview in which their communication skill in Korean and their learning motivation will be examined. The number of scholarship recipients has expanded from eight in the first year to 12 this year. 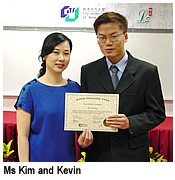 As a pioneer of the Korean studies in local tertiary education since its establishment in 2001, the Korean section at LS has been offering five courses in Korean, ranging from general language studies to Korean for specific purposes, such as for business.  Some 400students have enrolled last year.