Twelve members of the Qingdao Arbitration Commission () visited the School of Law (SLW) on 13 May to receive an insightful lecture by Professor Peter Malanczuk on the WTO dispute settlement system. 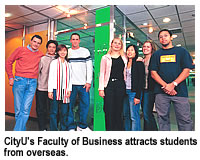 Professor Malanczuk is Chair Professor of Law and Director of CityU’s World Trade Organization Research Centre (WTODR).
"This visit by the Qingdao Arbitration Commission delegation to the WTODR Centre and the School of Law resulted in fruitful discussions showing the excellent opportunities that exist for cooperation with mainland institutions in the field of arbitration and WTO law training," Professor Malanczuk commented. "Both sides look forward to further exploring how to make best use of these opportunities. At the same time, today's event was also a positive collaboration with the Hong Kong Institute of Arbitrators."

Invited by the Hong Kong Institute of Arbitrators (HKIA), the delegation spent four days in , with the CityU visit as their final stop before returning to . The President of the HKIA, Mr Samuel Chat Chor Wong, requested the lecture from Professor Malanczuk for the ten Qingdao Arbitration 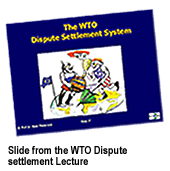 Visitors from the WTO

Professor Malanczuk's lively lecture, interspersed with cases in point, began with the amusing observation that the WTO's representative building, as pictured on the official website is, in fact, the League of Nations building, while the WTO's actual home is smaller and located somewhere off to the right and behind the edifice depicted. The lecture spanned the history of the WTO and entered into detail on the Dispute Settlement Body, the appointment of Panels, the litigation 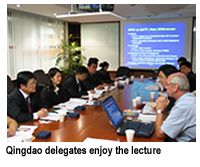 process, and the Appellate Body, one member of which, Professor Giorgio Sacerdoti, visited CityU in February this year.

The WTODR Centre, established in January 2002, has already achieved a reputation for excellence and received numerous special guests and visitors such as Mr Pascal Lamy, European Union Commissioner for Trade, H.E. Mr Shotaro Oshima, Permanent Representative of Japan to the International Organizations in Geneva, and Ms Amina Mohamed, Ambassador of Kenya and Permanent Representative to the United Nations and the WTO. The WTODR Centre is the first university based center, not only in Hong Kong and China, but in the whole of the Asia-Pacific Region, that is dedicated to the study of the interaction amongst globalization, legal development (especially in the field of international economic law) and international dispute resolution mechanisms.

Kenyan Ambassador's visit
Righting the applecart with the WTO