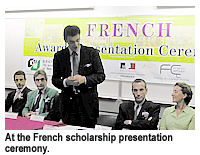 Strong interest in French and continuous hard work have earned a group of outstanding students various awards at CityU’s fourth annual French Award Presentation Ceremony on 24 April. 15 students received scholarships and sponsorships from the Division of Language Studies (LS), the Consulate General of France in and the Université de Bourgogne. Additionally, 16 CityU students who passed the Test de Connaissance du Francais (TCF ) received their certificates, which were issued by the French Education Ministry. Among them, 11 obtained Level Two and five obtained Level Three. The test, which was held for only the second time in Hong Kong, has six levels and it grades its candidates from Elementary to Upper Advanced levels. Another student, Jim Yang Fan, from French II, received a HK $2000 book prize from Parenthèses-Continental Books Ltd.

Mr David Santandreu, Lecturer and Coordinator of the LS French Section chaired the ceremony. Professor H K Chang, University President, Mr Serge Mostura, Consul-General of in , among others, officiated the Ceremony.  “I am both grateful and nervous," Professor Chang said, "I am grateful because so many important celebrities in the community took the time to attend our ceremony; grateful because our staff is so dedicated to an initiative that I took seven years’ ago that has more or less flourished. However, I feel nervous because our Consul General chose to speak in English. This year is Chinese Culture Year in France. So we will do a culture exchange. Hopefully, this will be a good example to our students. They should not feel afraid when they are asked to speak French.”

Mr Santandreu also showed his appreciation. “I am delighted to see our student’s continuous efforts in studying French and I feel proud of their achievements in various competitions. And I am very grateful to the French Consulate General in Hong Kong. They have been very supportive of our activities to strengthen our students’ real-life languages abilities by providing them opportunities to study in France.” 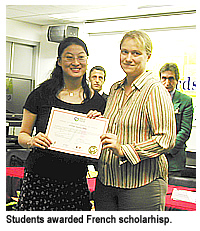 Wang Jing from French II, Elena Zhang Hanxiao from French III and Abby Zhou Weiyuan from French II were awarded the Consulate General of France Scholarship for students. The scholarships cover one month’s study at the Université de Bourgogne in Dijon, France. Elena, who currently studies Human Resources Management in the Faculty of Business, said, “I feel excited about going to France to learn the language and explore the French culture. I intend to  improve my French during this summer’s intensive courses in Dijon. And, if I have the chance, I will also try to continue my Master's studies in Management or a related subject in France.”

This is the first time that the Université de Bourgogne in has offered a scholarship to CityU French students. Eleanor Zhang Ling from French III, received the scholarship, which covers a one-month French study fee andaccommodation.Besides the scholarships, 10 students from LS were given LS sponsorships. Each sponsorship is about HK$8,000 to contribute to the student's French course fees in either the Université de Bourgogne or Universite Stendhal Grenoble 3.

The French Section aims to motivate students to strive for excellence in French and to recognize their achievements with the annual awards. The sponsorships and scholarships provide French students with precious opportunities to polish their French language skills in France, as well as to explore and better understand French culture.