Will the new salary scales and pay-raise system, proposed by the Management Board’s Core Group On Staffing Policies  To Tackle The Budget Constraints, be an effective way to tackle the University’s budget deficit? Is the pay-raise mechanism acceptable to existing staff? Should the University establish a set of clear and objective criteria to assess staff performance? These were some of the questions raised by the more than 100 staff members who attended the open forum on these issues. The forum, held 14 April, was organized by the Human Resources Office (HRO).

“The aim of the Core Group’s proposals is to achieve a balance between budget savings and maintaining salary competitiveness for retaining and recruiting staff,” said Dr Ellen Ko, Director of HRO and forum facilitator. “More importantly, the University would like to promote a performance-based reward culture, which will be reflected in the new pay-raise system.” The longstanding, automatic pay-raise system will be abolished. Starting from , a new pay-raise system will be introduced and only staff with “good” or “outstanding” performance will be awarded half or one increment of the salary scale, the first round of implementation scheduled on .

Although there was no obvious objection to introducing such a culture, concerns were raised and points debated as to how to ensure an objective and transparent mechanism to assess staff performance. In paragraph 8 of the Proposed New Salary Scales and Pay Raise System consultation paper (for the proposals’ salient features, please see the table below), it is stated, “Pay raise will normally be awarded for good to outstanding performance. Recognition should be given to staff members who take up extra workload, wider and/or higher level responsibilities.” Some staff questioned the meaning of words such as “good,” “outstanding,” “extra” and “higher.” “We support the performance-based evaluation system,” said one staff member, “however, without a set of clear and measurable criteria, the system can be abused easily.”

Professor Matthew Lee, Associate Dean of the Faculty of Business, and a member of the Core Group, agreed with this point. He also noted that such objective criteria should be incorporated at the beginning of the cycle of annual evaluation, so that staff will know exactly what is to be assessed.

As to how to develop a set of reliable criteria for all staff, Mr Joseph Chan, Acting Director of Student Development Services and also member of the Core Group, offered that all jobs generally have two elements—qualitative and quantitative. “In a way, it’s 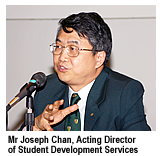 easier for a more operational or junior levels to use a more quantitative approach.” For senior levels, he noted that a more discretionary approach is common in commercial organizations. “It’s regarded as motivational and could be useful in judging a higher level of performance.” Nevertheless, Mr Chan admitted that “it’s extremely difficult,” given the broad diversity and the spectrum of job levels, to come to a clear definition of what’s good, what’s average and what is outstanding.

The need to establish an appeal mechanism was also raised at the forum. According to the proposals, the Approving Committee and the Line Manager are to be the final decision makers for academic and non-academic staff, respectively, in considering a pay raise. There is no opportunity to appeal a case. Staff urged the university to reconsider this, so as to avoid unnecessary office politics. “We need a set of operational framework to ensure that the good intentions of the proposal are implemented and to build a better working environment for all staff,” another staff member at the forum remarked.

Among the proposals, the Core Group took the opportunity to create a parallel career path for those staff members who prefer to focus primarily on teaching. Two new post titles will be introduced: Senior Instructor I and II. Their terms of service are identical to those of the new Associate Professor and Assistant Professor, respectively. At the forum, a number of staff members argued that the change is not necessary and the re-titling is a demoralizing downgrade in status. They noted that 80% of the University Grants Committee (UGC) funding goes to teaching, while only 20% goes to research. One staff expressed the view that with the new role statement, CityU is defined primarily as a “teaching university,” and asked why it would be necessary to downgrade the title of staff doing a job which is more closely aligned to the university’s new mission statement. 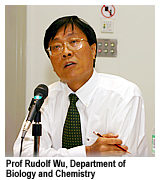 To this, Dr Ko responded that existing staff will not have to change their titles, unless they so choose. Professor Rudolf Wu, Chair Professor of the Department of Biology and Chemistry, and a Core Group member, pointed out that CityU is not primarily a teaching university according to the UGC statement. It has to do with research as well as teaching. The majority of academic staff employed by the University are required to do both. “The purpose of devising such titles is to create a new career path for staff who wish to concentrate on teaching. Whether the titles are appropriate, or not, is completely open for debate,” Professor Wu said. 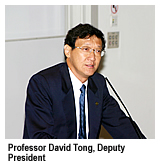 Deputy President Professor David Tong, Convener of the Core Group, at the end of the forum explained the reason for the title changes. “It’s because, for the self-financing programmes, we may need to hire staff who exclusively teach.” Depending on the circumstances, likely candidates for such positions may include business managers, engineers and computer professionals, according to Professor Tong. They may not mind being given the title “Senior Instructor,” he added.

In his closing remarks, Professor Tong thanked colleagues for expressing their views and urged them to face the high possibility of CityU’s  40% funding cut. This percentage includes funding withdrawal from associate degree and taught postgraduate programmes, as well as a 10% sector-wide budget cut in 2004-05, and a “0-0-X” percentage cut in 2005-08, where ‘X’ is no more than 5%. In the future, UGC funding is to be divided into three categories: 65% for undergraduate places consistent with CityU’s Academic Development Proposals, 25 % for research through the Research Assessment Exercise, and 10% based on role-related performance. “If we fail to do well in any of these three areas, we will not even be able to keep the remaining 60% funding,” Professor Tong said. Some universities, he added, are introducing major or across-the-board salary cuts. “The only way we can avoid this is to do well in all three areas. The only way we can do so is to keep the CityU brand desirable through good teaching and high quality applied research. The good brand will enhance the University's activities in generating new revenue through self-financing teaching. We have faith in our staff. Let’s stop being inward-looking. Together, let’s work toward building a better university and a better future for all,” Professor Tong urged.

The forum was chaired by Core Group members, Mr Joseph Chan, Professor Matthew Lee, Professor Rudolf Wu and Mr Gabriel Chan, Director of the Finance Office. Academic and non-academic staff heads were invited by the Core Group for consultation before the proposals paper was issued and sent to staff on 26 March. All staff were invited to the open forum to express their views. Opinions collected at the forum will be considered before the proposal is presented for Council approval.