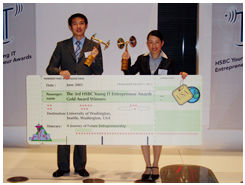 Two City University students have a one-week study tour at the University of Washington to look forward to this summer, thanks to a winning business plan. Ms Rachel Lui and Mr Matthew Chang, students from the Faculty of Business and Faculty of Science and Engineering, respectively, won the Gold Award in the Third HSBC Young IT Entrepreneur Awards on 27 March.

The HSBC Young IT Entrepreneur Awards aim to cultivate and inspire young people's interest in entrepreneurship and information technology. This year's contest required participating teams to develop an innovative business plan involving the use of information technology. Competitors from the post secondary institutions had to go through four rounds of competition, from September 2002 to March 2003. 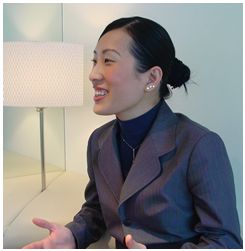 Ms Lui, a year three student majoring in Accountancy and Information Systems, and Mr Chang, a year four student studying Computer Science, co-developed a business plan for an on-line fashion consultant, dubbed "Mattrae & Company", to provide customers with personalized fashion advice. Ms Lui acted as the creative partner of the team, while Mr Chang, with his strong IT background, oversaw the technical side of the project.

Ms Lui, who has an interest in fashion design, believes that the idea of an electronic fashion consultant would appeal to many career women in Hong Kong and elsewhere. And with the current level of IT in Hong Kong, Mr Chang believes their proposal could be a winner.

"The competition offered us an excellent opportunity to work with our imagination and creativity, and to learn entrepreneurial skills in an enjoyable and exciting way," Ms Lui said. "The training workshops hosted by practitioners from different industries enabled us to meet with some of the most successful and influential people in the business and IT worlds," Mr Chang added. Both of them agreed that they gained a lot from the competition and encouraged their fellow students to participate in similar competitions. 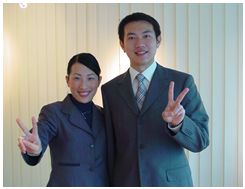 In addition to their hard work and cooperation, they said they also owe their success to support from their professors and schoolmates, including Professor L K Chan, Dr Louis Ma, Dr James Robins, and Ms Wisteria Cheung, from the Faculty of Business; Professor Liu Zhi-qiang, from the School of Creative Media; and Dr L F Kwok, from the Department of Computer Science.

Ms Lui and Mr Chang said the award was proof of their ability and creativity. "We are now better equipped and have more confidence in working towards our goal of owning successful enterprises." The budding entrepreneurs plan to start up their own businesses upon graduation.