Intellectual energy flourishes in the mind, not in buildings

At this year's Lunar New Year Staff Party, the President wished every member of staff, their families and the University a prosperous and productive Year of the Goat. Professor H K Chang was doing his best to pep up staff spirit in the face of a "gloomy" budgetary outlook for local universities, a scenario that has captured intense media and staff attention since late last year. 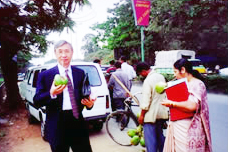 In rallying the audience of some 1,000 staff who gathered at the sports complex on 7 February to share the fun, luck and comradeship, the President said: "My job is to continue to argue in the open arena for the funding needs for higher education in to be sustained." Whatever the outcome, however, he cautioned the University community to ready itself for change. Any great university in the world is neither totally dependent nor independent of government funding, he said. "It is a beneficiary of both public and private support. This mixed funding approach will certainly be integral to CityU's future, too."

With his remarks still reverberating, Linkage talked to the President immediately after the party to find out more about his comments. His observations, it turned out, arose directly from his six-day trip to India during the Lunar New Year, but were, generally, born of his long experience in higher education, first as a graduate student and then as a seasoned teacher and administrator, across three continents and five countries.

At the invitation of the Indian Council for Cultural Relations, an autonomous body under the aegis of the Ministry of External Affairs, Professor Chang went to , and Mumbai ( ), where he met with high government officials and vice-chancellors and directors of universities and science institutes between 29 January and 5 February. Everywhere he wentNthe Jawaharlal Nehru University, the University of Delhi, the Indian Institute of Technology in Mumbai, the Tata Institute of Fundamental Research and the Indian Institute of Science in Bangalore , to mention a few placesNhe was impressed by the vigour and quality of Indian universities, a burgeoning education system that now enrols more than 10 million students. "Their campuses and facilities are definitely not as good as those in ," Professor Chang said, "but their students exude a strong sense of confidence and purpose." While is still counted as a developing country, it has made impressive strides in science and technology, most recently transforming itself into a major source of engineering and IT talent for US companies. Around the in , for example, the semiconductor (integrated circuit) industry has long been dubbed an "IC" industryNIndian and ChineseNthanks to the ubiquitous presence of, and enormous contributions made by, engineers and scientists of these ethnic backgrounds. As much as the Indian government has a big hand to play in the nation's higher education system, Professor Chang said, its universities and colleges are gradually feeling the need to solicit more support in private funding, from industry in particular. The same situation applies in another Asian economic powerhouseNChina, a country with a per capita income of less than US$1,000 but with a teeming population of more than 16 million college students. In moving from a state-directed economy towards a market-oriented one, the country's top universitiesNPeking, Tsinghua, Fudan, and Shanghai Jiao Tong, for instanceNhave been encouraged to top up government subsidies with outside income by undertaking more technology transfers and contract research.

In developed nations like the and the , the same funding formula applies: more and more world-class universities are financed by a mixture of public and private monies. Public institutions like Oxford and Cambridge , for example, draw as much as 35% of their operating revenues from private research grants and contracts, on top of what the government has provided for student places. US private universities from coast to coast: Stanford, Northwestern, Harvard and Princeton now supplement their substantial endowment incomes with tuition fees and, more important, government research grants and contracts. "What we can see is that no top universityNprivate or publicNlives on a single source of funding only," said Professor Chang. "It's always a combination of both sources."

In that vein of thought, he believes that CityU, like our local counterparts, has to diversify its funding support from being purely dependent on the government to attracting more non-government sources. "It's a challenge we have to rise to meet, willingly or not, but the earlier the better." Yet the President does not want to treat the coming budget cutback as merely a money issue but, rather, to seize the opportunity for some institutional "soul searching". "IOd like to turn this into a chance to enhance our students" learning attitude and boost our research atmosphere," he said, "even if we have a budget cut, we won't lose our intellectual vigour or forget our basic mission as a university, that is, to develop the human mind and cherish intellectual accomplishments." Professors C N Yang and T D Lee, the first Chinese winners of Nobel Prize in Physics, in 1957, received their undergraduate education during the anti-Japanese War of the early 1940s when living conditions were extremely difficult and classes were often conducted in war-torn buildings with bombers circling overhead. The Indian universities and colleges are also much less privileged than ours in Hong Kong in terms of staff salary and benefits, equipment and campus facilities. Yet the Indian systemNin particular their numerous institutes of technologyNis by and large a success story, producing a vast contingent of top scientists to support the country's technology drive and economic development. What sets a great university apart from the rest is the quality of its students and graduates, as well as the vigour of its intellectual atmosphere. "Intellectual energy flourishes in the mind, not in the buildings" Professor Chang said, "it has something to do with the physical environment but is never totally dependent on it."

He vowed to continue to argue in public that funding for higher education should be sustained. "But inside the University, IOll beseech colleagues not to let the budget crisis become a hindrance to our development." We must not forget, he stressed, that central to a university's mission, perhaps even more so when times are tough, is to encourage the quest for knowledge, truth, and the nurturing of a spirit of curiosity among students and staff in their intellectual journeys.