Out-of-classroom learning experience has become increasingly important to university students these days as they prepare themselves for their careers in a competitive workplace. On recognizing this trend, the University has been active in building such experiences into the students' whole-person development experience. In December and January, 17 CityU students attended a three-week internship programme held in Chongqing, Sichuan, a municipality directly governed by the central government. 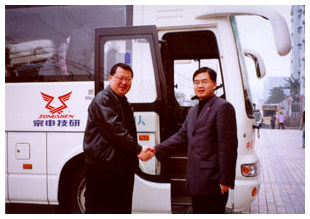 The programme, organized by the Career Centre of CityU's Student Development Services (SDS), was hosted by the Chongqing Zongshen Motorcycle Group, whose owner, Mr Zuo Zongshen, is ranked the 12th richest Chinese business person by Forbes magazine. "We hope the programme will provide students with an early understanding of the real world of work," said Mr Rock Tam, the Centre's Senior Counsellor. "For many employers, it is one of the most desirable qualities they want in fresh graduates."

The students arrived in Chongqing late on the evening of December 23 and threw themselves into work the next morning. After a one-day orientation, they were assigned to a variety of tasks in such departments as Production Management, Logistics, Human Resources, Capital Management, Customer Services, Technology, and the CEO's Office. "It's not easy for most companies to arrange short-term work for the students," said Ms Cherry Lum, another Senior Counsellor in the Career Centre. To help students make the best out of the internship, SDS counsellors conducted three training workshops before the trip. Discussions were also held in most evenings during their stay at Zongshen. The key, according to Ms Lum, was to prepare them for a totally different environment - "one in which they cannot wait for things to happen but need to take the initiative to learn."

Ms Emily Lui, a third-year student in the Department of Management Sciences, enjoyed the highly regimented approach. "Through such discussions, we not only identified our goals quickly but also developed a good attitude towards work. More important, we got a bigger picture of what was happening to the other students." The counsellors also requested that each student provide feedback to the others in the discussions. "That certainly forced us to think more critically," Ms Lui added. 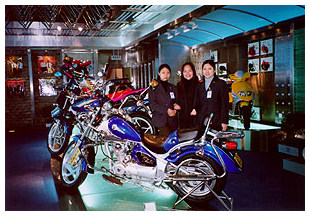 Before their placement, some students were a little concerned about working in an industrial city in the mainland. "Actually, most of us had a nice office and some even had a computer," said Ms Juliana Koon, a second-year student in the Department of Marketing. "Although our supervisors and colleagues were very busy, they still spared time to help us learn about the working world. They were willing to provide us with the necessary information to facilitate our work and allowed us to attend their meetings. I learned so much." 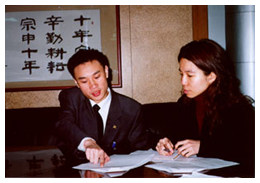 Mr Jackson Mok, a third-year student in the Department of Management Sciences, also found the programme rewarding, particularly because he is interested in pursuing a career in logistics. "I am very glad that I had a chance to work in the Costing Department," he said. Mr Mo's task was to look into the difference between the motorcycle factory's production and the number of motorcycles it had in storage and to find ways to minimize the difference by streamlining the production and supply process. "I feel that I learned a lot, because I was well prepared."

Mr Tian Yi, Director of Zongshen's Human Resources Department, welcomed the students' efforts. "It surprised me that they were so professional, so practical in their approach to work," he said. "Given the same conditions, I would be quite surprised if a mainland graduate would do as well."