CTEX hangs out its shingle for more "income-generating" businesses 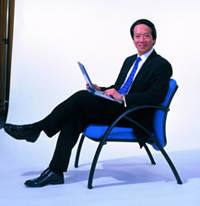 We haven't the money, so we've got to think." The truism uttered by Lord Ernest Rutherford, the 1908 Nobel Laureate in Chemistry, has never been more apt for the higher education sector today than for CityU. The University faces not only the government budget crunch, as do all its counterparts, but also the probable additional setback of losing public funding for its associate degree programmes in the next few years. Even though no exact date has been mentioned, the potential threat that losing a sizeable chunk of its recurrent grants poses to the institution's financial stability looms larger by the day. Responsibility to find ingenious ways to generate extra income to help the University to continue to focus on its vision, and achieve its mission, has now largely fallen on the shoulders of Mr James Ng, Executive Director of CityU Extension (CTEX).

Mr Ng's office is a new umbrella group resulting from the senior management restructure last December. It oversees and coordinates the University's major Oincome-generating" units: the School of Continuing and Professional Education (SCOPE), CityU Enterprises Ltd, CityU Professional Services Ltd, and City University Press (UPress). Mr Ng's challenge is not for the feeble-hearted: to keep the income streams flowing and flowing. But he is not a newcomer to the field, either. Mr Ng served as the University's finance chief for more than 10 years before becoming, in his last assignment, Vice-President (Business and Finance)Nhe knows his job like the back of his hand.

"Generating additional income, to meet the financial shortfall caused by dwindling government support, has been written into the strategic plan 2003D08 as one of CityU's basic goals," Mr Ng said. The plan, entitled "Meeting the Challenge of Change", was recently approved and unveiled by the Council. In 2001D02 (the latest statistics available), government subventions accounted for as much as 73% of the University's total recurrent income of HK$2,449 million, with tuition fees making up another 21%. The remainder came mainly from tuition fees from self-financing programmes (mostly run by SCOPE), fees from technology transfer and consulting services, and investment earnings, most of which now come under Mr Ng's overview.

From now on, however, the last income stream is expected to make a bigger contribution as the Government has time and again hinted that public funding, in a time of a severe budget deficit, will be slashed, over the next triennium or two, probably by as much as double digits. While Mr Ng will not disclose his expectations at this stageNhow much more income he hopes to generate from CTEX activitiesNhe promised to make a presentation at the coming budget hearings before the senior management, for the year 2003D04, to be held on 22D24 January.

SCOPE as the flagship

This goal may be easier to achieve for some than for others, obviously. Among the offices for which Mr Ng is responsible, SCOPE is perhaps the best positioned to move up a few notches, both in the scope of its educational services and the amount of revenue it helps to rake in. In 2001D02, SCOPE, according to Mr Ng, made an overall HK$50 million surplus on a HK$200 million turnover, the third largest among its counterparts (trailing behind the and the ). Yet these figures alone could mask SCOPE's true growth potential. CityU's own extension arm into lifelong and professional education, unlike those of HKU and HKBU, has no (or a very small) formal academic staff establishment. All its academic and training programmes are offered jointly with academic departments, as SCOPE provides the necessary planning, marketing and administrative support. This helps to reduce cost and explain its relatively high surplus ratio, compared with the others.

To expand its reach into the community, and to achieve better performance, Mr Ng said SCOPE will need a concentrated effort by the University to have all self-financed programmes offered under one roof. At present, associate degree programmes offered by the University fall largely into the exclusive domain of the . While some departments are offering programmes direct, Mr Ng said, "It will be a win-win situation for SCOPE and the departments/divisions to work together to make these programmes financially viable." Realizing that the funding scenario is clearly moving towards a self-financing mode for sub-degree courses, he said, some College teaching staff have already offered to join SCOPE when their programmes are switched over to a self-financing operation, in exchange for increased teaching hours and workload, instead of losing the programmes and their jobs altogether. For SCOPE, venturing into the expanding associate degree market will give them a through-train advantage when students, on graduation, look for articulation arrangements into bachelor's degree programmes, locally or otherwise. Whether this is feasible will require thorough discussion at the highest level in the University in the coming months. No matter what the outcome is, Mr Ng said, SCOPE meanwhile will lose no time in preparing itself to extend the booming lifelong and professional education markets, SCOPE's bread-and-butter work, as well as expanding the articulation focus to students other than our own associate degree graduates. One likely development in the next few months: to offer executive training in cooperation with the local business community, professional bodies and chambers of commerce. CTEX is optimistic that management training programmes will be offered in the delta region in 2003. As a start, the courses may be offered at hotel venues targeted at the tens of thousands of and local managers who now call their working home.

Two business firms, CityU Enterprises Ltd and CityU Professional Services Ltd, are also expected to play a bigger part in Mr Ng's scheme. The former focuses on commercializing research outcomesNboth technology and productsNto the commercial sector, while the latter provides consulting and services to the community, usually in non-technical areas.

Out of the 40-plus subsidiary and affiliated companies under the aegis of CityU Enterprises, wholly-owned by CityU, 15 or so are more active than the others, showing greater potential in the marketplace. "Some have real promise," said Mr Ng, citing, among others, the examples of wireless antenna and energy conservation projects by Chair Professors Kenneth Mei, Luk Kwai-man and Ron Hui, from the Department of Electronic Engineering. "These companies are at a stage where their products or services are a few steps away from either production or market launch." Though these companies start small with some "pretty good ideas", they generally run into the same problem over time: insufficient working capital and market support. Mr Ng admitted that luring external investments in these companies, through raising bank loans or venture capital, has lately turned into an uphill battle, particularly after the dotcom bubble burst. And the prospect of IP's, such as TeleEye, is also remote, at least "not foreseeable in the next two years." CTEX, however, is undaunted as it will step up its marketing support efforts for these companies, much like "farmers furrowing the land and sowing seeds in spring for autumn harvest".

On the other hand, CityU Professional Services, with a turnover of $55 million last year, is also expected to take a more proactive stance in making CityU's professional expertise available to the community. Last year, University staff were invited to bid for some 1,800 outside consulting projects, from private firms or government departments, with some 800 returns actually made. CTEX will strive to improve both the bidding and the success rates. In the next few months, the University will clinch a number of substantial projects, Mr Ng said, with a glint in his eye.

Lastly, the City University Press, with its affiliate the Media Production Service (MPS, which includes the Reprographic Unit), will also see some changes in direction. The Press, according to Mr Ng, will have to move towards a self-supporting status, bringing in more revenue to offset its expenses. It will, for example, start exploring the publishing of more "market-oriented" titles, such as textbooks and general books, other than pure academic tomes. Concrete plans have yet to be put forward. UPress's design and production arm will have to be pepped up to undertake more value-added internal jobs. At present, as much as 80% of the University's needs for design services are outsourced and Mr Ng hopes to significantly reduce that percentage, with MPS gaining more ground by providing much improved services and quality. The printing unit will, as far as possible, also undertake outside jobs, after fulfilling internal work requests. The unit has signed a deal with the photocopier supplier whereby a higher work volume, while incurring lower marginal cost, will bring in a greater profit. "If we could solve the copyright issue," Mr Ng said, "the potential is good for a photocopying and printing service." Some overseas universities have succeeded in bringing out textbooksNa collection of chapters or parts from different authors and publishersNthrough simple reprographic means. These have proved to be very popular on the market.

To make CTIX effective, the first operational arrangement is to bring the different offices under one physical roof. In February, four offices will move into the fourth floor of the Festival Walk offices. However, over the long term, if the overriding goalNgenerating more income for the UniversityNis to make its mark, some changes in policy are in order. The most fundamental of which, Mr Ng said, involves properly motivating and rewarding staff for their contribution to the community through outside practice or commercialization of technology. While the University's outside practice rules may have to be streamlined, he believes generating income for the University through commercialization of research results, consulting services and the like should be treated, where appropriate, as part of staff performance and contribution. Unless such an entrepreneurial spirit is encouraged in our staff, with suitable reward and recognition, Mr Ng believes that the University's "extension" work will have a hard time making a noticeable impact on our real and perceived worth in the community, let alone on our shrinking bottom line.