The Jewish and Chinese diasporas

The word "diaspora" in its normative usage indicates the dispersion of Jews and the settling of Jewish communities after the Babylonian captivity. More generally, it refers to Jews living outside of or modern . In recent decades, however, discussions of cultures and communities other than the Jewish have often applied the word "diaspora" in a much expanded sense to include other minority groups living outside their native land. The term has been used in a broad sense with reference to overseas Chinese communities, so perhaps it is time we looked at Jewish and Chinese diasporas together. What do these groups have in common? What local, regional, and global implications may the relationship between such diasporas and their host nations have for the future? Let us begin by taking a look at the comparison of the Chinese and the Jews.

Editor's note: The following article is an abridged version of Professor Zhang's paper, "Jewish and Chinese Diasporas", which he delivered at the Howard Gilman International Conference: ", and the Jews," on 24 September. The conference, held in , was organized by CityU's Centre for Cross-Cultural Studies and the Tel Aviv University of Israel.

The Jews of Orient 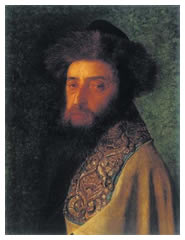 Many scholars have mentioned 's King Vajiravudh as one of the first to compare the Chinese with the Jews. The Thai king called the Chinese "the Jews of the Orient" with all the implications of age-old anti-Semitic stereotypes. Such a negative comparison, however, was hardly original and had historical roots reaching back to a much earlier time. In 1602, an Englishman named Edmund Scot made a similar comparison when he described the Chinese in Java "who like Jewes live crooching under [the Javans], but rob them of their wealth, and send it to ."

At the end of the 19th century, Warrington Smythe, a British adviser to the Thai government at the time, "saw the Chinese as advancing socially and economically at the expense of the Thais." He also called the Chinese "the Jews of Siam." In 1914, the aforementioned King Vajiravudh published a pamphlet called The Jews of the Orient in which he defined the Chinese as outsiders, who were negatively compared to the Jews as foreign intruders taking over the local economy and society at the expense of the "natives".

Since the Jews and the Chinese had existed in their respective host countries for a very long time before the late 19th century, the intensification of anti-Semitism and anti-Sinicism at the turn of the century must have had some specific historical circumstances. Daniel Chirot, Professor of International Studies and of Sociology at the University of Washington, who has been working on the causes of ethnic conflicts and their solutions, argues, "the rise of modern nationalism hardened attitudes toward those newly viewed as outsiders. Entrepreneurial minorities, previously seen as just one more among many specialized ethnic and religious groups that existed in most complex, premodern agrarian societies, now became, in the eyes of the new nationalists, something considerably more threatening."

The comparison of the Chinese to the Jews, however, does not come only from the negative side of anti-Semitic and anti-Chinese nationalists. For example, Professor Wang Gungwu, an expert in the field of overseas Chinese, particularly in , has edited two volumes of essays entitled The Chinese Diaspora. Professor Wang had reservations about using the term "diaspora" because he wanted to emphasize the diversity of overseas Chinese communities. In the end, he advised using the term with necessary caution. "Of course," he says, "it is misleading and politically sensitive for the Chinese to be compared to the Jews in the Muslim world of , but if the reality makes the comparison appropriate, so be it."

In my view, that comparison is indeed appropriate, and Anthony Reid's idea of "entrepreneurial minorities" might be a good place to start. Reid, who co-authored a book with the previously mentioned Professor Chirot entitled Essential Outsiders: Chinese and Jews in the Modern Transformation of Southeast Asia and Central Europe, maintains that Jews in Central Europe before World War II and the Chinese in Southeast Asia are "the two most important entrepreneurial minorities," and by that he means "economically powerful but politically disadvantaged minorities." He argues that the Jews and the Chinese are comparable "in their creative and vulnerable role as Ooutsiders at the centre' in dynamic processes of change." On the creative side, both Jews and the Chinese are doing remarkably well as entrepreneurial minorities, particularly in finance and trade.

For example, it has been pointed out that in Vienna before World War II, Jews had an enormous impact on many aspects of Viennese society, not only in cultural areas but on the city's economy as well. As for the Chinese in Southeast Asia, a 1997 Chicago Tribune report, "Chinese Expatriates Dominating Asian Economies," told the story well: although ethnic Chinese count for less than 2% of the population in the Philippines, they own 55% of the wealth in the private sector. Similar figures were cited for Indonesia, Vietnam, Thailand and Malaysia. It is beyond doubt that the overseas Chinese in Southeast Asia are spectacularly successful in business and trade.

Indeed, it is the predicament of economic success and political disadvantage that makes the Chinese and the Jews remarkably comparable. So is the parallel situation of the potential danger of tension and conflict. It is the negative response from the "native" majority and political leaders in Southeast Asian countries that makes the Chinese minorities vulnerable as "outsiders at the centre".

In , for example, the response takes the form of rather aggressive state intervention, for many policies and government regulations are ostensibly designed to give Malays an upper hand at the expense of the Chinese and the Indians. may have the most blatantly hostile state policies towards the Chinese, but similar conditions exist in and other Southeast Asian countries as well. In this connection we may recall the restrictions historically imposed upon Jewish communities in and the resultant disproportionate over-representation of Jews in finance and commerce.

Role of culture and tradition

Steven Beller, an independent scholar and author of and the Jews, 1867-1938, observed that in premodern and early modern , Jews "had served only particular functions in the economy, as moneylenders and merchants in particular trades, because Christians should not perform such immoral servicesE ." The connection between Jews and money was thus a result of prejudice that had, however, resulted in a socioeconomic reality whereby finance, especially the finances of many Central European states, was often "in Jewish hands," to use a loaded phrase.

Again, the situation of Chinese entrepreneurial minorities in is remarkably similar. Walter Zenner, a professor of anthropology and Judaic studies at the State University of New York, , wrote that "Jews and excommunicated Christians provided loans in mediaeval Christendom, while Chinese were the lenders among the Muslims of Indonesia, and elsewhere." Scholars have tried to understand the Jewish and Chinese diasporas from either an economic or a cultural perspective. In my view, economic and cultural aspects are not immune to one another, but economic behaviour as a special kind of human behaviour is often determined or over-determined by culture and tradition. Indeed, if we consider the important role of culture and tradition, it would not seem so surprising that Jewish and Chinese diaspora communities have behaved very much alike and have very much the same kind of success in finance and commerce, though in many other aspects these two groups have very little in common.

How to maintain balance among the different ethnic groups and prevent serious racial and ethnic conflicts in the future are important issues for the region, and indeed for the world at large. These are of course complicated issues and difficult to have solutions that can eliminate all potential conflicts once and for all. And yet, in search of solutions, I believe that we need to come back to economics and culture again, for the sustained economic development and improvement of the quality of life for all is the effective means to attack the problem at its very root.