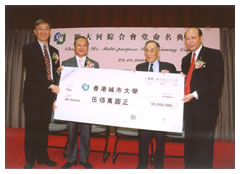 In recognition of his generous contributions to the University, the Sports Complex Multi-purpose Hall was named after distinguished industrialist and philanthropist Mr Chan Tai Ho on 22 October.

At the naming ceremony, Mr Chan presented a HK$5 million cheque, which was received by Mr Norman Leung, Council Chairman of the University. Other guests included President H K Chang, and Mr Chuang Shih-ping, Member of Chinese People's Political Consultative Conference Standing Committee and Honouary Chairman of Nanyang Commercial Bank Ltd. "City University is in the city, for the city and by the city," said Professor Chang in his welcoming address. "We are greatly encouraged by the generous support from the distinguished and dedicated industrialist Mr Chan Tai Ho. I express my deepest thanks to him." Professor Chang also expressed his gratitude to Mr Chuang Shih-ping, who is Mr Chan's close friend and had played a key "match maker" role in making the donation a reality. Professor Chang then invited Mr Chan to come back again and share his success story with students.

Mr Chan Tai Ho came to Hong Kong in the early 1960s. Through persistent hard work and foresight, he overcame a variety of obstacles to build up the world-famous toy enterprise, Playmates, which was listed on the Hong Kong Stock Exchange in the 1970s. An ardent supporter of education, Mr Chan has made generous donations to enhance and re-develop school facilities on both the Chinese mainland and Hong Kong. He has been granted honourary citizenships in Shantou, Jieyang, as well as an honourary medal from Puning, for his contributions towards the well-being of that village. 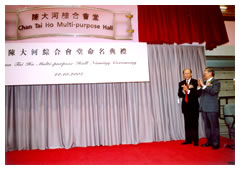 With a floor area of 2,000 square metres, the two-court Chan Tai Ho Hall is an important venue for the whole-person development of CityU's students. It is the training ground of the University's athletic teams, as well as the venue for various recreational and sports activities. It is also the site for special annual events such as the Congregation and examinations.