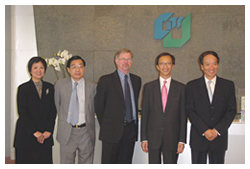 The Financial Secretary of the Hong Kong Special Administrative Region Government, Mr Antony Leung, said he was "greatly impressed" with CityU's teaching and research achievements following a tour of the campus's advanced academic and research facilities on 12 July.

CityU extended a warm and gracious welcome to Mr Leung, who was greeted by a senior management delegation led by Mr James Ng, Vice-President (Business and Finance), Mr John Dockerill, Vice-President (Planning and Information Services) and Secretary to Council, Mrs Diana Ying, Associate Vice-President for Institutional Advancement, and Professor Roderick Wong, Dean of the Faculty of Science and Engineering. 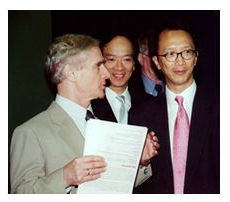 Mr Leung's tour was organized to help foster a better understanding of the University's research and development excellence. The two-hour visit included tours of the School of Creative Media's Master of Fine Arts Lab and AVID Lab, the Department of Electronic Engineering's Wireless Communications Lab, and the offices of DCDC Ltd. DCDC is a CityU Enterprises company specializing in digital content development with offices in Festival Walk.

At the School, Mr Leung was shown student multimedia projects that made use of pioneering digital technology. He said he was pleased to learn that courses in Creative Media are helping to nurture talented professionals to better support Hong Kong's expanding media industries. 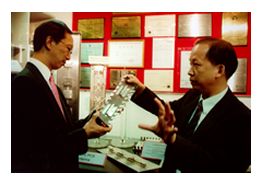 At the Wireless Communications Laboratory, the Financial Secretary was given demonstrations of prototypes and products developed at the laboratory, including base-station antennas and state-of-the-art measurement facilities. At the University's incubated company specializing in high-end computer graphics and animation production, DCDC Ltd, Mr Leung was shown samples of its long-format 3D animation episodes using advanced digital technology.

Mr Leung is no stranger to excellence in education. Prior to assuming the post of Financial Secretary, he was a non-official member of the Executive Council from July 1997 to April 2001, serving as Chairman of the Education Commission (April 1998-April 2001), and Chairman of the University Grants Committee (1993-1998).

"I am pleased to see the full-fledged development of City University, which uses its expertise to nurture young professionals, taps the wisdom of its scholars for research excellence, and achieves technology transfer to industry," said Mr Leung at the conclusion of his visit.

"Such developments not only signify CityU's dedication to education, but also demonstrates its commitment to contribute to the economic development of the Special Administrative Region."