Did you ever imagine that a simple wooden board, some paper, a few strands of cotton string and a glue stick could make a building capable of withstanding powerful earthquakes?

That's the kind of thinking CityU's Department of Building and Construction aims to inspire through its Build and Shake Inter-school Competition (BASIC). Held for the first time in Hong Kong at CityU on 29 June, more than 100 secondary school students took part in the competition that challenged their talent, skill and scientific knowledge in building a three-storey frame model to resist artificially generated earthquake loading. 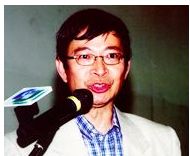 After five hours of hard work, 20 teams of secondary school whiz-kids finished their small-scale anti-earthquake models. After measuring and mounting, the models were shaken by a series of earthquakes of gradually increasing intensity at CityU's Heavy Structures Testing Laboratory, which has the largest shaking table in terms of surface area (4m x 5m) amongst local universities. The model capable of withstanding the highest shaking intensity before collapsing was declared the winner.

"We hope the students will exercise their team spirit, apply their scientific knowledge and get lots of fun out of the competition," said Professor Andrew Leung, Head of Department of Building and Construction, at the opening ceremony. 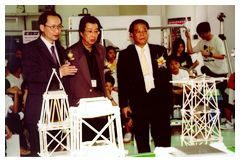 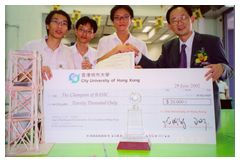 "Keep up! Don't fall down!" was the shout of the day at the event. After 10 rounds of shaking, only one model remained standing on the shaking table. The championship went to the HKTA Tang Hin Memorial Secondary School Team, comprising students Yu Wun-kei, Tse King-tong and Lee Kin-hang. Their structure was able to withstand a load equivalent to a Magnitude 9 earthquake on the Richter scale.

The winners received a cash prize of HK$20,000 and a trophy. The first and second runners-up were Yan Chai Hospital No.2 Secondary School and CCC Mong Man Wai College, each receiving HK$10,000 and HK$5,000 respectively. 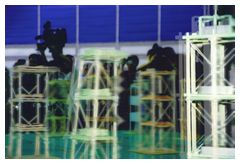 "Without doubt, this competition has further enhanced our interest in structural engineering ," said Tse King-tong. Other participants said they had gained valuable experience from the competition and learned a lot from the advice of CityU lecturers. "Build and shake is a new and interesting idea to many students. We believe this event will boost students' interest in learning about science and inspire them to understand more about construction engineering in tertiary education," said Professor Kitipornchai, consultant to the competition.

The Department of Building and Construction will launch its new "Modern Structural Engineering" degree programme in the 2002-03 academic year.