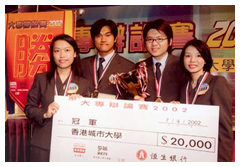 The City University debate team took its first ever championship in the annual Inter College Debate Competition by beating the Chinese University team with a unanimous 5-0 vote from the adjudicating panel. CityU student Li Kin-on was also awarded the title of Best Debater in the event, which was held on 7 April. 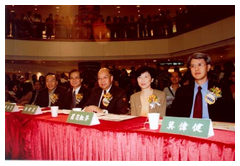 "We are so proud to have won CityU's first debating championship. We had only five days to prepare for the debate but we tried our best to search for information and even ran a mock-up debate before the formal competition took place. On behalf of our team, " said Li Kin-on. "I would like to offer my heartfelt thanks to Mr Chan Kwok-keung, a CityU alumni and former CityU debate team member, who gave us so much help, advice and support, without which we might not be able to become the champions," . 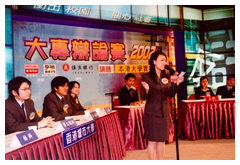 The event, jointly Radio Television Hong Kong (RTHK) and the Hong Kong Federation of Students, and sponsored by the Hang Seng Bank, will be aired in the programme "Mysterious Week" at 9am, 14 April on RTHK Radio 1. You may also listen to the debaters' performance on the RTHK website.