Image or reality: the theme of China in the West

"There is no need to emphasize the richness of the theme of in the West," Professor Jonathan Spence, Sterling Professor of History at , began. "For the last 400 years, the West has been infused with images of and the Chinese. No other country or culture has absorbed so much energy and so consistently in the Western world."

There is a problem with this as a field, however, as the sheer volume of the contacts has led scholars to construct explanatory schema and to organize their beliefs around messages that seemed clear to them at the time: the craze for chinoiserie in , for instance, or the more recent emphasis on totalitarian aspects of Chinese society. "And there's been the cult of the exotic as that was refracted through European civilization, the study of sentiment as a force," Professor Spence said. "All have something going for them and suggest we already have a complex historiography of image building."

Ideographia: The Chinese Cypher in Early Modern Europe, a recent book by Professor David Porter, focuses on images of in the West during the 17th and 18th centuries and attempts to find an organizing structure by concentrating on the images. Porter finds four major organizing principles, all based around the same binary structure: initial feelings of intense belief and admiration, followed by intense disillusion and disappointment. "Many experts have tried to make only one schema," Professor Spence said. "Professor Porter, by overlaying all four, has again shown us where we've got to in this new century as we again try to make sense of this extraordinary record." 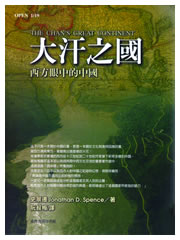 One of the schemas was the dream of finding in an organizing principle behind the languages of the West. In 17th century , scholars regarded the Chinese language as the epitome of order, rigour and clarity. They believed that if they could find the key--the Clavis Sinica--in three months they would be able to understand Chinese culture, "… learn the language, find its principles which lay clearly behind the alphabet, beyond the organizing structures they had in the West, and bring them to a kind of fulfilment of knowledge," he said.

When the absurd dream failed to materialize, linguistic admiration gave way to "an extraordinary tempest of abuse" against , one of the most striking examples of which was Admiral Anson's belief that the Chinese themselves didn't understand their language but used it as a means to deter foreigners from settling on their shorelines.

The second schema was the dream of finding organized theological principles in and Chinese religious history. Scholars believed the underpinning of Catholic theology could be understood by the correct reading of early Chinese texts, where would be found a logical structure that would strengthen the belief in Christian monotheism and lead to a deeper understanding of 's past. "This was a strongly held passion among many--Matteo Ricci and others, particularly French scholars," Professor Spence said. When this belief was also found to be untrue, it led to a further disintegration of faith.

The dream of social and administrative order and economic rationalization, as these could be drawn from Chinese culture and civilization, was the third schema. In this image, was seen as a colossal edifice of well-structured order, administrative skill, and professional examinations, with a permanent civil service of integrity and scholarship. This was refracted into many areas of European thinking, Professor Spence said, and was dissected by powerful thinkers like Montesquieu, who analysed the Chinese legal structure and decided that because absolute power resided in the hands of one person--the ruler--Chinese law was not based on compassion and justice, but on fear.

This perception of was held by other thinkers and philosophers, including Adam Smith, from whom it entered the realm of proto-modern economists and the thinking of Thomas Malthus. "This again ended with disillusion, that this was not a well-constructed, integrated administrative system, it was in danger of fragmentation and break up," Professor Spence said.

The last of the schema was the Chinese vision behind chinoiserie, the cult of Chineseness that was largely a French concept but was also popular in , the and . Behind the cult was an earlier admiration of Chinese aesthetics as presenting a unifying harmony of the structure that lay behind artistic creativity and "gave promise of a real alternative to the kind of increasingly bleak revival of classicism in much European architecture and art." Another shattering disillusion followed, when the Chinese concept of an aesthetic broke apart and led to a similar shattering of confidence in . With linguistic, theological, administrative and aesthetic disillusion complete, the scene was set for the complicated stage we were to enter in the next centuries, Professor Spence said.

A ballet of hostility and affection

For Professor Spence, however, the problem with such sophisticated schema is that they are full of contradictions and overlaps, and is difficult to know on which scheme to focus at any one time. "It's hard because however carefully you amass your lists of sources on different themes, there is no period at all that doesn't have counter-themes. There is no period where we can talk about innate hostility to without finding somebody who loved , and vice versa."

Particularly puzzling for Professor Spence is the question: what or who brought on the disillusionment? Was it the spirit of the times, he asked, was it the reader, or the writer? Referring to Professor Zhang Longxi's book Mighty Opposites, he said Professor Zhang used the metaphor to posit the force of Chinese culture on one side and Western culture on the other. "The idea of mighty opposites is fascinating as it suggests the strength of both partners in this strange ballet of interposed hostility and affection." 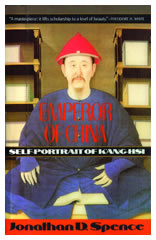 What Professor Spence suggests is that we should not be searching for overarching schemes that explain everything, and should instead use genre driven research to look at the nature of what people are trying to do before labelling them as either favourable or hostile. By taking the novel as a structure, and looking at what is the main action of the protagonists, it is possible to divide fiction about images of China that have had an impact on the West into two main groups. The first is the Westerner who travels in and brings his images out for broader readership. Marco Polo was the precursor of this, but by the 16th century, the theme was very strong and continues down to the present. The second is the Chinese who strays into the West--a popular genre in fiction.

And the idea of a Chinese in the West can be split into two sub-genres: the genre of Chinese in the US as being a way of looking at Chinese culture and using it for fictional, satirical or critical purposes, for example, in the novels of Mark Twain, Jack London and John Steinbeck; and the genre of Chinese-American writing, in which the authors write in English about their predicament of being a Chinese living in a Western environment, trying to understand the civilizations of the West.

A different kind of genre is the ideologically motivated genre, the memories brought back by people who actually lived in . One sub-theme worth exploring here, Professor Spence said, is the question: should you have gone to to understand , or does having gone to reconstruct new blinkers on your thinking? When does familiarity bring knowledge, as opposed to clich?? "Obviously such works have a polemical purpose, a political thrust that you wouldn't find in some of the other genres."

For instance, Matteo Ricci wanted to show a certain picture of , so his memoir had an immense impact. But we must remember, Professor Spence said, that the published version was not exactly what he wrote, the memoir having been edited by Nicolas Trigault, then submitted for censorship. "In fact, many things quoted in translation as being Ricci's view of are interpolations of later editors."

This type of religiously or politically motivated memoir was followed by an enormous body of diplomatic writing, often ideologically motivated, an idea that became dominant in the 18th century.

From memoir to political theory

A further genre borrowed Chinese motifs for ideological purposes and moved away from the personal memoir into the realm of political theory. "There was a deliberate attempt to borrow motifs from what was now understood about but, in this case, by people who didn't go there, for example Voltaire, Montesquieu and the Jansenists in ."

Then we have the recreators of , "Ethose who have the gall to try and recreate a more holistic vision of Chinese culture and achievement." This is the domain of many academics, Professor Spence said, those who try to reconstruct a bolder vision, who bring images of China back into the West whether they want to or not. And perhaps this recreation of has been taken over by the mass media: documentary, docudrama, opera, television and film, spreading a reconstructive vision of with extraordinary force. "As we're told now by film critics, many of 's fifth wave of film makers have been distorted by a vision of what the West wants to see of , even though they are Chinese creating imagery we are going to receive."

Finally, we come to the image of a different kind of picture, in which is refracted into the West: the over-sensitized Western scholar, the butt of fiction for the way they attempt to interpret what they've seen and try to understand about . For example, in Jorge Luis Borges' The Garden of Forking Paths and Elias Canetti's Auto-da-Fe

, the protagonists meet death because they have interposed themselves between mighty opposites.

In conclusion, Professor Spence said: "In his book, Professor Zhang quotes Leitnitz: 'We must continue to study and think about China so that as the most cultivated and distant peoples stretch out their arms to each other, those in between may gradually be brought to a better way of life.' May that be a goal and achievement of your Centre for Cross-Cultural Studies."