Hands Across the Water

CityU's annual cultural festival kicked off this year with an exhibition of ethnic costumes and silverware from nine Chinese minority groups.

From a private collection belonging to Ms Lee Mei-yin, the exhibition, at CityU Gallery from 20 February to 1 April, displays traditional costumes from the Owenk, , , Yi, Tai, Li and Miao people. The items displayed at the exhibition include Qing Dynasty royal robes, Miao formal dress, Mongolian wrestling costumes and ethnic wedding dresses. These exquisite materials not only demonstrate elaborate design and workmanship, but also relate the myths, customs and culture of the minority groups. "This is the first exhibition of these costumes in ," said Ms Lee, a scholar of ethnic culture. "By studying them carefully, we can understand the different characteristics of the minority groups and their perception of beauty." Ms Lee also delivered lectures on ethnic costumes. 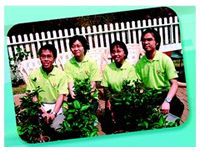 Meanwhile, this year's Wellness March activities were opened with the planting of a peepul tree and hybrida seedlings on the university hillside trail. "Recent technological advances in communications don't eliminate misunderstandings between people and different cultures," said Professor Y S Wong, Vice-President (Institutional Advancement) and Chairman of the Cultural and Sports Committee at the opening ceremony on 28 February. "That's why we chose the slogan Hands Across the Water for this year's cultural festival. We want to bring different ethnic groups of the world together." 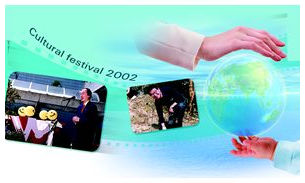 A perennial event of the cultural festival, the Wellness March promotes a healthy and positive approach to life through activities such as health and fitness exhibitions, workshops, guest talks, visual art exhibitions, hiking and adventure camps.

The two-month festival will feature music, dance, poetry, and much, much more. For example, two new initiatives, Lunch Time Cultural Performance and Film Series, will continue from February through April. In keeping with the multicultural spirit of Hands Across the Water, the Chinese Civilisation Centre will host a three-day conference, Cultural Traditions and Globalization: East and West.