I wish all of our colleagues a very productive Year of the Horse, with prompt success in work, good health and fortune, like a horse galloping at strength." So began the President's festive wishes when Linkage caught up with him on the eve of the Lunar New Year. Professor H K Chang's remarks, which he described as freewheeling as a flying horse, dwell on a word play of equine-related Chinese proverbs and idioms. 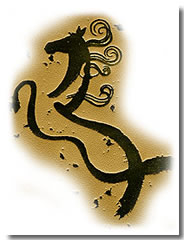 The horse is a popular icon in Chinese culture and folklore, said the President, with a treasure trove of proverbs and idioms attributed to it. The hoofed animal is often taken to embody such qualities as diligence and hard work, speed, steadfastness, courage, stamina and resilience, all of which are virtues human beings try to emulate and uphold. Of the 12 animals of the Chinese Zodiac, horses are also said to inspire human beings most with their audacious character and forward-looking spirit.

At the dawn of the Year of the Horse, the President said that CityU's achievements in the past year, as in the previous 17, have not come easily but through the hard work and dedication of every member of the university community, who works as diligently and steadily as a horse. It may be natural for staff to look up to the President and his senior colleagues to meet future challenges, as a herd of horses follows its leader. But leadership aside, he said, the key to success lies in the fostering of team spirit and self-initiative among all staff. Professor Chang urges every staff member to take an active lead in their work, like a stallion leading a team of horses and, in particular, to apply more whips and spurs on quality teaching and research so that progress can be made at top speed."Certainly I'm not a lone ranger and I can't take on all the challenges myself. I count on the invaluable advice, support and unstinting cooperation of many experienced staff, who, like veteran horses, know their way well around at CityU and beyond." The President also admonishes staff to always strive for self-development and enhancement, much in the way a general frequently drills his soldiers and war horses so they are always in peak condition , in order to help push the University towards breaking new ground and attaining greater achievements.

Professor Chang is aware that there are increasing shreds of evidence, like the remains of a spider web or footprints on a horse track, which show that a certain part of the community does not clearly understand CityU's role. They are not sure if we are a teaching or a research university, and they often paint us as neither a horse nor a donkey . This misconception poses a threat to our University but the President emphasized that this may turn out to be a blessing in disguise, much like, in the famous Chinese legend, the old man on the frontier losing his horse and not knowing what the final outcome will be for him. "What has come to pass will give us an opportunity for self-reflection, a chance for us to explain to the community who we are, what we are good at, that is, what our positioning is." At this time of building our reputation and mapping out our future course, the President said, it's imperative that we have no black sheep in our midst . He hopes that, as horses don't turn their backs on their masters, the spirit of unity will prevail in the University community. The administration of the University and the setting of policies will be conducted in an open and candid manner. "They will not be wishy-washy, nor black turned into white, nor deer labelled as horses," he promised. Staff comments and opinions will not go in one ear and out the other, either, as the Chinese proverb describes wind blowing in a horse's ear. In grooming people for promotion and positions of responsibility, he will try to emulate Bo Le, the legendary Chinese horse connoisseur, in observing, identifying and cherishing talented persons .

The President, ever minding a comparison of Chinese and Western cultures, pointed out that other cultures have added much colour and imagination to the equestrian species. Sura 17 of the Koran relates a dream or a vision of how Mohammed was summoned by the archangel Gabriel to travel from Mecca to Jerusalem and back, in only one night, on a winged steed called El Burak. The flying horse had the face of a woman, the tail of a peacock and the body of neither mule nor ass. In Jerusalem, Mohammed was led through the seven heavens, where, after meeting Abraham, Moses, Jesus and other prophets, he came into the presence of Allah (God) from whom he received divine instructions for himself and his followers. In Greek mythology, as another example, Pegasus, the beautiful famous winged horse, sprang from the blood of the beheaded Medusa, and from his hooves flowed the Hippocrene Spring, an eternal source of inspiration for poets.

Finally, the President, borrowing two verses from the Tang poet Li She, encouraged staff "to sprint ahead like galloping horses through diligence and hard work and never emit empty sighs of regret like an old and ailing dragon." He said that if we can learn from the example of the horse, in particular its diligent and obedient character, and apply it to good use in our work and life, we will be able to transform CityU into a more prosperous and productive institution .