Hands Across the Water 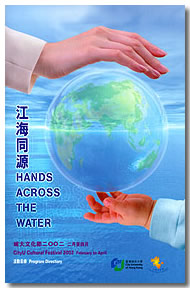 As reflected in its theme, “Hands Across the Water” CityU Cultural Festival this year brings into limelight cultural performances of many different countries.

CityU Cultural Festival 2002
As reflected in its theme, “Hands Across the Water” CityU Cultural Festival this year brings into limelight cultural performances of many different countries. From February to April, our campus life will be enlivened with performances and events with a multicultural character. “World City Cultural Night” an extravaganza of dances, songs, music and poetry from , , , and , will mark the beginning of the annual two-month occasion.

The Chinese Civilization Centre has invited four prominent scholars, Professor He Zhaowu, Professor Li Zehou, Professor Liu Zaifu and Professor Ye Xiushan to host a three-day seminar “Chinese Culture and Globalization” A “Chinese Ethnic Costumes Exhibition” to be staged at CityU Gallery, will showcase a collection on loan from Ms Lee Mei Yin, who will also hold a talk on the origin of some ethnic minorities and their cultures and traditions. Following that is an exhibition of some 30 oil paintings by Mr Tsui Tin Yun, who is acknowledged as one of 's best known contemporary figurative painter. Films produced by students from the School of Creative Media and documentary films on poets from Russia, the USA, Chile, India and Bangladesh will be presented to add "dim sum" to our lunchtime break.

Also not to be missed will be perennial events such as the Wellness March, CityU Literary Award, and performance by the CityU Philharmonic Orchestra, etc.