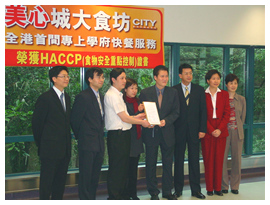 City Express, the University's popular canteen on the 5th Floor of the , is setting new standards among 's educational institutions in food safety, health, and hygiene.

The canteen, under the management of Maxim's Caterers Ltd since 1999, became the first of its kind on 15 January to receive the Hazard Analysis for Critical Control Point (HACCP) certificate from SGS Hong Kong Ltd, an international certification company.

"Among the catering community this is a big deal," said Heidi Hou, Maxim's Food Systems and Technology Manager. "The HACCP certificate is the ISO standard of the food industry." 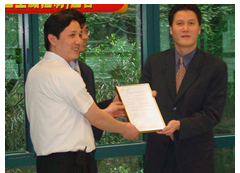 "We have the staff, and the equipment, and the know-how to achieve the certification," said Deana Siu, Catering Manager. "We've worked very hard for this."

The essence of the certification training is learning how to eliminate food safety hazards before they happen. City Express staff began taking courses in food safety last year. In-house training was then given to all 100 or so City Express employees.

SGS Hong Kong conducted a pre-audit of the canteen in October, and issued the certification on 15 January. The audit examines every aspect of food preparation, from purchasing to handling, storage, cooking, and serving.