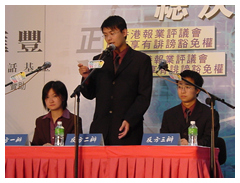 The CityU Debate Team took the first runners up title in the Inter-Collegiate Putonghua Debate Contest organized by the Radio Television Hong Kong this year. In the final contest held at Shatin New Town Plaza on 11 November, the CityU Team argued against the motion: "Should the Hong Kong Press Council be exempt from libel charges? " The rival team, from , won the championship and will later represent in a national debate competition to be held in .

The CityU team, comprising students Miao Yi (Department of Public and Social Administration), Lu Wei (Department of Economics and Finance) and Alice Chan (Division of Social Studies), was highly praised for its performance by the panel 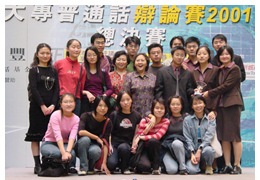 A total of nine tertiary institutions took part in the Putonghua debate contest this year. And in addition to the first runners up title, CityU also won a special prize: Best Cheering Team.