CityU's Centre for Cross-Cultural Studies (CCS), two years in preparation, finally made its official debut on 12 October. World-renowned sinologist and author of modern Chinese studies, Jonathan Spence, Sterling Professor of History at Yale University, delivered a public lecture on "The Image of China in the West: Accident or Design?"to a packed audience at the Wei Hing Theatre. 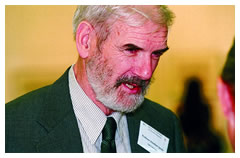 "No other country or culture has absorbed so much energy, so consistently, in the Western world as China," said Professor Spence, emphasizing the richness of the theme of China in the West in the past 400 years, particularly since the arrival of Matteo Ricci, a Jesuit priest, in Beijing in 1601. The need for cross-cultural c 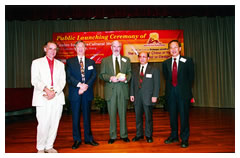 ommunication and understanding, especially in the light of developments after 11 September, was echoed by Professor H K Chang, CityU President, and Professor Matthew Chen, Dean of Humanities and Social Sciences at the opening ceremony. Cross-cultural studies were more important than ever, Monsieur Jerome Pasquier, the Consul-General of France, told the audience. Such understanding "will be good for Hong Kong, good for the West and good for China." 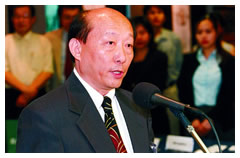 For his part, Professor Zhang Longxi, CCS Director, said he was excited that the Centre would contribute to East-West studies. "To be able to study history, philosophy, art, religion and the humanities combined as culture in the broadest sense, and not just Chinese culture but Western culture and cross-cultural interactions--this for me is a like a dream come true."

The public launch of CCS was followed by an international conference on Matteo Ricci, with more than 50 scholars from Mainland, Taiwan, Hong Kong, North America and Europe attending. Professor Sir Geoffrey Lloyd of the University of Cambridge; delivered a keynote speech on Ricci and the problem of cross-cultural interpretation. Sir Geoffrey argued that there was more compatibility between China and the West than has previously been thought and that Ricci, in his zeal to convert the Chinese to Christianity, did not properly analyze Chinese culture at that time.

The three-day conference at CityU included such diverse topics as Jesuit interpretations of Chinese classics, and the legacy of Ricci and the rise of modern science in China. CityU Press also unveiled a collection of selected Matteo Ricci writings and translations in Chinese to commemorate

The second part of the conference, attended by a dozen delegates, took place in Beijing on 16 and 17 October. Highlights of the programme included a viewing of a rare copy of Matteo Ricci's hand-drawn map (circa AD 1608) on display in the art gallery of the Italian Embassy and a visit to Ricci's tomb and the Southern Cathedral in the heart of the city.The highlight of the short trip was a three-hour seminar on cultural interactions between China and the West. Held at Peking 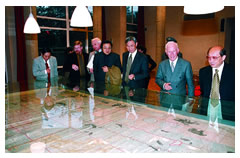